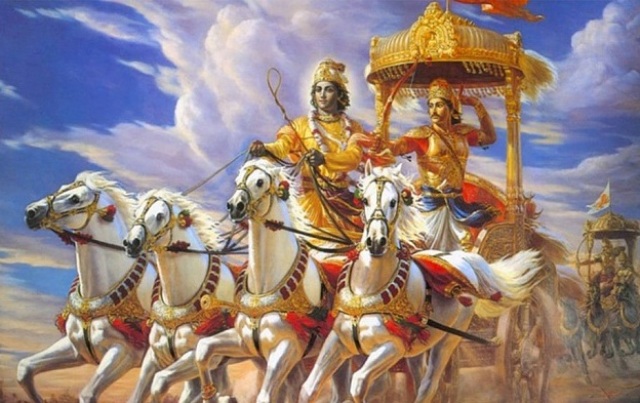 Lord Krishna’s teachings to Arjun on Dharma are timeless and very relevant to today’s modern world for people in all walks of life, says NITA AGARWAL in the fifth article in her series on Chapter 2 of the Bhagavad Gita

After revealing the highest truth ― that since the Atman is indestructible, imperishable and immortal, humans should not grieve about mortal death ― Lord Krishna reminds Arjun about his duty as a Kshatriya or warrior. He explains why following svadharma is very important for every being.

It’s a Kshatriya’s dharma to respond to the enemy’s attack with the aggression of a warrior. In fact, Arjun should consider himself fortunate for being a Kshatriya, as this role has given him the opportunity to be part of a Dharma Yudh (War of Righteousness), says Lord Krishna. A Kshatriya defends the weak and protects the people from aggression by enemies.

Kshatriyas do not wage wars to inflict pain on others but are duty bound to fight an aggressive enemy that is harming the people and the culture of the nation, the Lord points out. From the new drift in the nature of the teachings, it is evident that from the highest metaphysical plane, Lord Krishna has transitioned to the material philosophy of existence.

For a Kshatriya, abandoning Dharma Yudh would be tantamount to committing a sin.  The very purpose of human birth is to exhaust all mental impressions of past karma as one is born with certain tendencies because of them. It is the natural personality that defines the svadharma of any human being.

Arjun who possesses all the qualities of a Kshatriya was also trained in warfare. Therefore, when the Kauravas thrust war upon Pandavas, it  was, indisputably, Arjun’s dharma to fight the war. Not doing so would be sinful.

Moreover, if Arjun shunned the war then people would call him dishonourable names, which is considered nothing less than death for an honourable and honoured warrior like Arjun.

Other great warriors would think that Arjun abandoned the war due to fear and everyone would forget about his past heroism and call him a coward. A great warrior like him running away from the battlefield, overcome by emotions, would bring eternal dishonour, haunting him forever.

Lord Krishna warns Arjun that enemies would besmirch his glorious name and use foul, indecent language  to describe him.  Lord Krishna is now evoking basic human emotions in Arjun to influence his mind.

If Arjun dies in the war, then he will go to heaven for his chivalrous deed; and if he wins, he will enjoy the good fortune of being a king on this earth. Whether he dies on the battlefield or wins the battle, he will be a winner either way for following the svadharma of being a Kshatriya.

Going deeper into the issue, Lord Krishna tells Arjun that if he engages in war, following his svadharma, without thinking of pleasure or pain, gain or loss or victory or defeat, then he would not incur any sin. In fact, he would be following his call of duty without worrying about the outcome.

Here we must remember that Arjun was worried about incurring sin by killing his elders and cousins. Arjun also imagined that victory would feel like hell since he would kill his relatives to win the war. However, Lord Krishna counters this fear and delusion of Arjun, telling him that by not following svadharma, he would commit a graver sin.

Through Lord Krishna’s teachings imparted to Arjun, we can understand our own dharma or kartavya at any given point of time in life. For example, a student must prepare sincerely for the exams, just like a sportsperson must strive to perform well in a competition.

A teacher must teach well, while a leader must work for the people that he promises to look after at the time of election. We all must do our duty with sincerity and integrity, without thinking of the fruits of our labour. This should be our practice at all times, to truly fulfil our svadharma.

Indeed, Lord Krishna’s teachings to Arjun on Dharma are timeless and very relevant to today’s modern world for people in all walks of life.