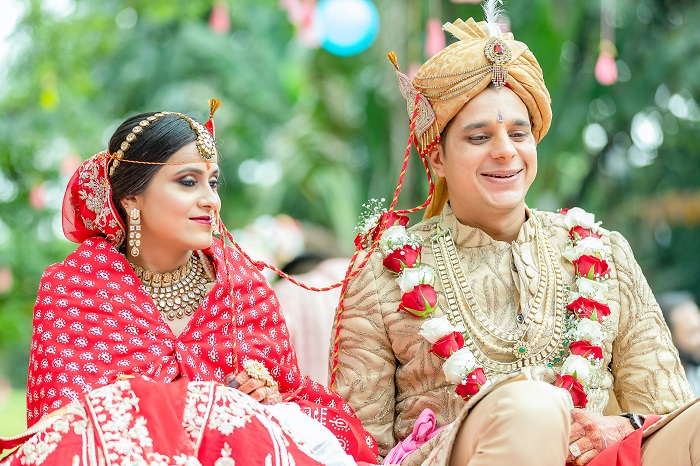 Rituals are not mechanical and mere formalities, but have their place in life – adding sacredness and righteousness to life and living, says MANAS DAS

Life has many wings, spreading its elegance, adorned with many colours and blessed with a vast sky to fly. When a child is born, ripples of happiness spread like scintillating music in the river of life.

The child brings joy in the household and with the love showered, blooms and becomes an adult, passing through difficult adolescence. Enriched by the family culture, nurtured by parental care, the young adult makes friends, and cultivates knowledge from schoolbooks, college lectures and laboratories.

The adult becomes capable of making choices, finding goals, living dreams; to  walk the journey of life; to build a life of his/her own.

And the children, growing into men or women, start  life of their own after marriage. Marriage may happen out of love for someone or someone chosen by the family. Marriage, indeed, is the final foundation of the building called life.

Every religion has a system of marriage. Mostly it is a usual convention to follow systems and rituals. Yet in the ever changing social fabric, perceptions on rituals too change.

Each person perceives life in a certain way. And the events follow. One looks at the events as per one’s perception. We experience as we perceive.  With a shift in perception, the vision too changes, changing the experiences.

Rituals of marriage in the Hindu community are not only based on scriptural guidance, but also carry rational social virtues to lead conjugal life meaningfully.

Kanyadaan is not merely gifting the daughter by a father ―  It is much more than that.

A father, usually considers his little girl as the most prized of possessions, and takes great care in her upbringing. Kanyadaan is a very emotional as well as a religiously significant act for the bride’s father and mother.

Scripturally in Hindu marriages, a groom is considered to be an incarnation of Lord Vishnu and the bride is regarded as a form of Goddess Lakshmi, the deity of wealth and prosperity.

Kanyadaan is the biggest offering that any parent can ever make. It is believed that Kanyadaan purifies all the sins of the bride’s parents. Kanyadaan is an intrinsic part of the entire wedding; this ritual is the initiation.

It is the start of the delinking of the bride from her family and freeing her to accept the new family of her husband. This ritual makes the groom realise that his bride is the most precious gift that he has ever received in his life. The groom promises to the bride’s father that he will never fail her in his pursuit of dharma (duty), artha (means of life)andkama (prosperity).

The ritual of Hastaganthi comes after Kanyadaan. Hastaganthi is joining the hands of the groom and the bride. It is a symbol of their impending marital union, and the groom announcing his acceptance of responsibility to four deities: Bhagya signifying wealth, Aryama signifying heavens, Milky Way, Savita signifying radiance, new beginnings, and Purandhi signifying wisdom.

The bride sits in front of the groom with her face to the East, while the groom faces the West, holding her hand, while priests chant mantras from the Rig-Veda. The Hastaganthi or Panigrahan invokes a divine union and the bride and the groom, each experiences a wonderful sense of responsibility, ownership and an exclusive relationship.

Hastaganthi is followed by Saptapadi or Saatphere, which almost completes the ritual of marriage. When the bride and the groom prepare to take the steps to move round the holy fire, seven times, holding each other’s hands firmly, the groom behind the bride, they not only evoke the Lord’s blessings and pray for each other’s health and well being, but also pray for their families and the whole universe.

The ritual invokes all the elements of the spiritual universe. Both the bride and the groom go round the sacred fire seven times, while priests chant the holy mantras from the Vedas.

Through the first step, the world of the man and the woman, united in the bond of marriage by Saptapadi, further promote the joy of life together. The groom vows, taking the first step: “Oh!, you who feeds my parents’ offspring and visitors with food and drinks. Oh! Beautiful lady, I, as a form of Vishnu, take this first step with you for food.”

The Bride vows: “Yes, whatever food you earn with hard work, I will safeguard it, prepare it to nourish you, your friends and family as well.”

Taking the second step, the groom and the bride vows for the strength of body, character and wellbeing to create a healthy home filled with strength and energy.

The third step is to fulfil the spiritual obligation of the couple and for the successful performance of their spiritual duties.

Taking the third step, the groom vows: “Oh! dear one, I promise to devote myself to earning a livelihood by fair means, to discuss, and let you manage and preserve our wealth. Oh! dear one! I, as Vishnu’s form, cover this third step with you to thus prosper in our wealth.”

And the bride vows: “Yes, I join you in managing our income and expenses. I promise to seek your consent, as I manage our wealth, fairly earned, so it grows and sustains our family.”

The fourth step is for the attainment of happiness. The groom vows “to trust the bride’s decisions about the household and her choices.” The groom promises to help the community prosper, and to earn them respect and to participate in their world. The bride vows to “strive to make the best home for both, anticipate and provide necessary things for his worldly life, and for the happiness of their family.”

The fifth step is a universal prayer for the welfare of all living entities. Taking the fifth step the groom vows “to consult her and engage her in family management, put in her hand all his income; with a promise to contribute a portion to the community.” The bride vows “to participate and protect the resources; those are useful for the family and for their happiness.”

Taking the sixth step, the groom vows “to seek the bride and only the bride to love, to have children, to raise a family and to experience all the seasons of life.” The bride vows “To be one with him,” and “to give consent for enjoyment of all the senses. Through life’s all seasons, she promises to cherish every moment with him.”

The seventh step is taken invoking the prayer and sacrifice for universal peace. After the seventh step, the two become man and wife.

On taking these seven steps together, the couple agrees to be companions forever and pray that they will never have any conflicts that will break their companionship.

Having sought each other out to be life partners, they agree to lead a harmonious life, taking into consideration not only each other’s likes and dislikes, but also keeping in mind the welfare of the entire family. They pray for their unity, prosperity and happiness.

As many of us are unaware of the beauty and sacredness of the seven steps and the vows that go with it, we often offer them mechanically. We must always try to live life to fulfil these vows and to make our children understand them, too.

Rituals are not mechanical and mere formalities, but have their place in life – adding sacredness and righteousness to life and living.