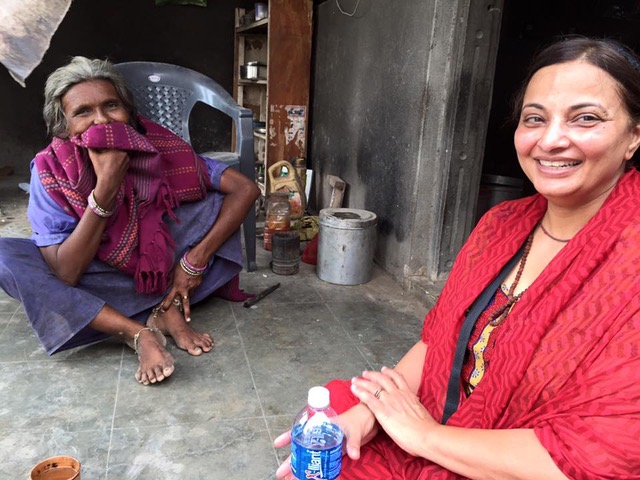 It all began when Munira Nagji began homeschooling her son back in the early 2000s in Calgary, Alberta, in Canada. So, successful was she in her new role, that the local community school soon sent her a kindergarten girl whom they said had a learning disability. Munira readily agreed and taught her for a year, at the end of which period, the girl was ready to join her regular classmates. There was no learning disability; the child had only needed the right guidance and approach.

That was the start of her formal work in the education sector. Next, at a Parent-Teacher meeting in school, she was asked if she could help the children of Afghan refugees who were encountering several difficulties in adjusting to the new school environment in Canada. “One of them had a brain tumour and needed extra help,” she recalled.

Munira took up the challenge and the experiment was successful. The numbers swelled. It was her way of doing seva for the community, even converting her own living room at home into a school. In all, she was able to help more than 13 children from 2005 to 2010. She became a recognisable name in the NGO sector and was approached by United Way in Calgary to help out with the Montessori education of children.

Chance would then take her back to India on a prolonged visit as her daughter began medical studies in South India. She seized the opportunity to start a classroom at an orphanage in Madurai, and soon established two classrooms there. “I provided the study material and the teaching aids.” By now, her work was being recognized in Calgary. She began receiving awards, finally winning the South Asian Excellence Award for Community Heroes.

Once she was back in Calgary, United Way approached her again, this time requesting her to go to Pune’s Maher Orphanage to start a classroom and train teachers there in their method of teaching. She was then approached to set up a classroom in Karaikudi Village in an orphanage by the Tamil Nadu authorities. Around this time, she also began work for Sathiya Bharti, an educational initiative run by Airtel, and so began regular visits to Tamil Nadu and Pune.

Then, in 2013, she was finally able to visit Jivapur village near Jamnagar, her mother’s hometown. It was like coming home and something deeper stirred within her. She saw the plight of a marginalised community living on the outskirts of the village, shunned by everyone. Their children were being denied a place in every school. Government schools were duty-bound to take them, but the children could not attend school in neat uniforms as they had no one at home to even wash their clothes.

“But it wasn’t enough, for every evening, they would return to the same environment,” she said. Determined to see this batch of children through till they were settled in life, Munira took another unprecedented step.

She hired a house in Jivapur and had the children shift in with her. That was in 2017, and she recalls how she successfully overcame every setback. “These were children of untouchables, and no one was prepared to rent me a house.” Finally, she did get the house, then had to raise money for renovations― Rs 3 lakh. Then began the daily task of cooking and cleaning for the children, and all the while, she was sharing the only bathroom with the children. “I could not even get a house help, as the village had such set notions about untouchables,” she recalls.

But soon, seeing her dedication, Jivapur relented. Gradually, she moved the children to a private school, and then was able to find place in the school bus for the children ― the other children would not sit with her children, so they had been denied the bus facility earlier.

Finally, she was able to put the children into a hostel in Vadodara into a bigger school, and that is where they still are. One among them has already cleared her grade 10 exams. Meanwhile, personal work took her back to Canada and now with the coronavirus pandemic, she is still there and is unable to return to India.

“But the children are being looked after by the school authorities and funding for their studies is being sent from Canada,” she says. Munira is keen to get back to continue her work for underprivileged children as soon as the virus is under control and it is safe to travel.