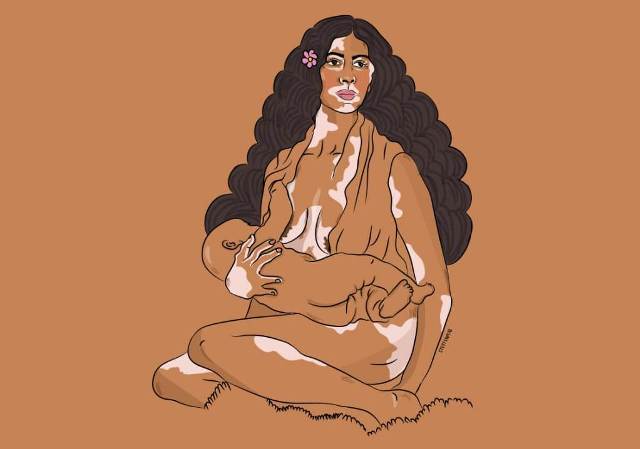 Vitiligo is just another disease, it is not infectious, nor is it abnormal. What we consider as an “even” skin tone is simply what we are used to, says MOHUA CHINAPPA

It started with a small discolouration on the side of her finger. She was too frightened to tell anyone and thought it must be nothing. She wore the biggest ring to cover the mark. In the nights when everyone was sleeping, alone in her bathroom, she used to scrutinise the size of the mark. Was it more than yesterday or has it reduced? Her fear was gnawing inside her. She felt like a helpless boat caught in the midst of the tide of the rogue seas.

To her utter horror it was increasing bit by bit. She was just recently married and taking anyone into confidence about this new change in her body was unthinkable.

She started to fear the hand wash, the creams and the food she was taking. She had no clue. What was the trigger? She sat alone and pondered. She examined every part of her body in the mirror. She opened her wardrobe and stared at the different saris and Salwar Kameez she had bought ― they seemed surreal, like a dead dream hanging on the rack opposite her. She did this over and over again, at the end of each day, when there was no work to distract her and till she finally fell asleep.

Before she knew it, her lip was losing its pink sheen. At nights she began applying pink lipstick, so that her husband couldn’t see the tiny white patch on her lip that had entered her mouth like a cloud-shaped monster.

They began their arduous journey of finding treatment: The homeopath doctor who gave her bottle after bottle of hope. The allopath who gave creams and pills. The Ayurvedic physician and his arcane herbals. She sat steadfastly to answer all the doctor’s questions and she took the medicines month after month to no avail.

The discolouration had now spread all over her body, arms, feet, breasts and stomach. As time passed the Vitiligo had started its aggressive dance on her skin, creating patterns and myriad shapes. The only consolation was that her face was spared.

She was grateful that it was still just on parts that are usually covered. But soon the little patch on the lip that she was covering up with lipstick had grown, and now it was on her face, which she couldn’t camouflage. One day, when she looked in the mirror she only saw a stranger staring back at a stranger. A face that was patchy with brown and white skin. She knew her life was changing and she had no control, and no one could help.

She found herself staring intently at the faces of acid victims. It only made her feel worse. It was not pity, it was pain. She wondered, “if I was having such a hard time going through so many painful emotions and fears every day from losing just the colour of my skin, how does an acid victim cope?”

There is an incomparable pain in losing yourself to something that you never imagined would happen to you. Many people would love to help you, but they can’t. It is a lonely journey. Shaken and terrified with the new her, her past identity and self-esteem was now in shambles. Her mind still assumed it was the old her, but the senses and the outside world told her different. When she finally told her husband that what was happening to her was Vitiligo, and that it was irreversible, she lowered her eyes in shame. The wait for his response seemed eternal.

She waited anxiously for his expression to change, but there was none. Except an unmistakable glint of fear in his young eyes. Then, he smiled gently, and with a brave yet calming demeanour, he held her to his chest and said “it could’ve been me.”

She sobbed into the pillow that entire night and told him she was pregnant and he was free to leave whenever he wanted.

He held her close into his arms and made love to her. He was sensitive to switch off the light, so that not a streak of light could enter her room. Afterwards, she found herself staring vacantly at the fan above her head, burring and buzzing like a machine with no emotions. She watched the clockwise movement of the handles, fanning all her muffled fear around her, encompassing her like an octopus.

She dreaded being rejected by him. Would her discoloured breasts repulse him? But he seemed unperturbed. He behaved like nothing was wrong with her body.

Soon she became a mother. The first time she held her baby to her breast, she was worried her child would be repulsed. But he seemed to be in a cocoon of warmth. This was her moment of divinity as she immersed herself into the marvel of procreation, watching him gurgle and suckle away.

She cried till it soaked her inner being. To a child, everything about their mother is “normal”. She produced as much milk as any other woman, and for her baby, she was special. One of a kind, forever.

She whispered in his baby ears and watched him sleep peacefully. She told him that reality is a twisted version of the truth. Reality differs from person to person.

Her child will grow up knowing no difference. The only difference she feels is in the stares of onlookers and the caustic comments of relatives and so called “friends”.

She used to switch off the light when she changed or made love or even just entered the shower. And she never looked into the mirror.

But all that has changed now and she asks him boldly to let the streak of light enter her room and bathe her in its spiritual light, healing her as her body finds his and their souls connect. She has grown wiser from her ordeal. She feels powerful. She feels unique. Why wouldn’t she, she asked herself? If the world did not see this as a disorder, she would be admired. And in some alternate universe, where this was “the normal”, she would, with everyone else, marvel at those with an even tone. Or would she judge?

Beauty exists for us to discover in all its forms. Are we cheating ourselves of life by limiting our definitions?

She knows she is beautiful.

I wrote this story for Vitiligo patients. This story is based on the many stories I’ve seen and heard about people who are blindsided by the sudden onset of Vitiligo. Vitiligo is just another disease, it is not infectious, nor is it abnormal. What we consider as an “even” skin tone is simply what we are used to, it is not “reality”. We see spots, patches, striations and lines on animals and find them stunning. Imagine, if we had evolved with something like Vitiligo as the normal, we would have no trouble accepting it as beautiful on humans too. It is simply one among many interesting variations of life and that is all those with Vitiligo want you to see them as they are.

Mohua Chinappa, who writes content with a steadfast mission towards activism, has been passionately writing on gender, entrepreneurship, handmade, sustainability, arts & crafts. Over 20 years in the business of selling dreams and managing campaigns across industries, she has worked across India in the international markets for PR/Advertising.