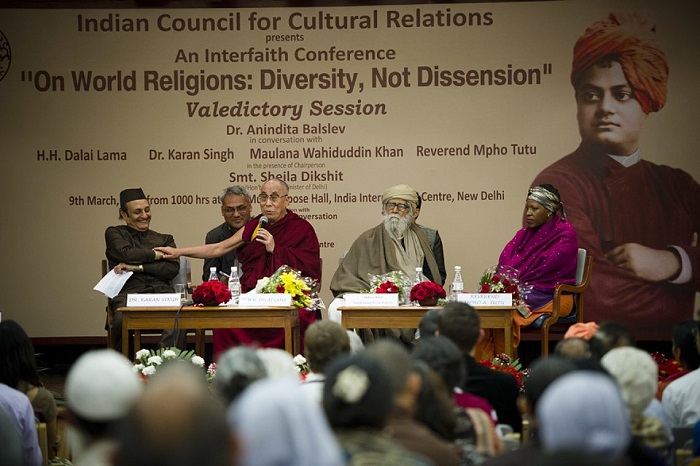 MAULANA WAHIDUDDIN KHAN was a great proponent of Interfaith dialogue and peaceful coexistence and till his last days, urged his followers to learn from people of all faiths

Maulana ji who participated in every interfaith programme, he was invited to, would often quote the Quranic verse: “To you your religion. And to me, mine.” He believed in the principle of mutual respect in dialogue: “Follow one and respect all”. “While we follow our own religion, we have to respect others,” Maulana ji would say.

His advice was to welcome differences wholeheartedly without any reservation.  Elaborating, he said: “It is hatred, which has to be eliminated, and not difference of opinion. People may have their differences in belief, religion, culture, and so on, but while following their religion, they have to have mutual respect for other people and discover a common bond between them that makes them realise that all are human beings.”

For Maulana ji, the objective of dialogue was mutual learning, not debate. He explained that there is a big difference between debate and dialogue. In debate, one is an advocate of one side and wishes to prove the other side wrong. Such an approach is not conducive to understanding and tolerance. It promotes hate and intolerance.

Dialogue, on the other hand is based on the principle of live-and-let live, and of mutual respect. One has to fully acknowledge the other’s point of view, and present one’s own view in a manner which is understandable and acceptable to others.

“In this way, dialogue produces peace and harmony while debate produces hatred and distrust. Hence, we are not left with any other viable option but peaceful dialogue,” Maulana ji explained.

He said Islamic history is replete with examples as to how Muhammad, the Prophet of Islam and his companions interacted with other faith groups in a positive way and never showed extremism in their approach.

He was by nature, a seeker. He followed this principle of mutual learning in daily life as well. He always tried to learn from others. His seeking spirit had no end. He learnt from secular people as well as people of other religions.

The method he gave from the Islamic perspective for interfaith dialogue was based on peace as successfully demonstrated by the Sufis.

He said: “The approach of the Sufis can be best expressed in the term they coined, “Sulh-e-kul” that is, Peace with all. It was this peaceful approach that resulted in the spread of the peaceful message of Islam in South Asia. By using this approach, they established a history of peaceful co-existence in Islam. Sufi Khanqahs were, so to speak, international religious centres for the followers of every faith.” (A khanqah is a building designed specifically for gatherings of a Sufi brotherhood and is a place for spiritual retreat and character reformation.)

He went on to say: “It is this spirit of Sulh-e-kul which needs to be adopted – and adapted – for the modern age. The Sufis worked during the pre-media age and, at that time, opportunities for interaction were very limited.

“Now, we live in the post-media period. With the advent of the age of communication, we have vast opportunities to spread the message of peace all over the world. We can rightfully say that what was earlier possible only at a national level has now become possible at an international level.”

Note: The information in this article is based on a Q & A with Dr Rajat Malhotra, Maulana ji’s Disciple and Global Coordinator of CPS International, Center for Peace and Spirituality.