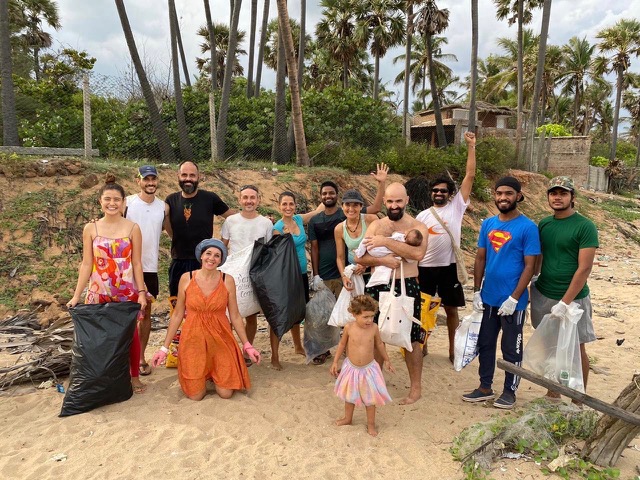 SEEMA MUNIZ profiles a group from Puducherry’s Auroville, who found themselves stranded in India after the lockdown, but decided to put their time to good use

For the 60-plus members of zerowaste, it hasn’t been so easy to turn plastic trash collected from local beaches into veritable pieces of art, but Satya, a prominent group member prefers to describe it with one magical word – abracadabra. Most of the members of zerowaste are young backpackers from around the world stranded in Auroville after that sudden fateful lockdown in March.

“Our objective is not only to clean up the beaches, but also create general awareness on its importance,” says Satya, adding, “Do you know that more than 650,000 marine animals including dolphins, whales, seals and turtles, are killed or injured in discarded fishing nets each year?”

While some artists expressed interest in all the glass bottles that had been collected, and some others in the bottle caps, no one seemed to have any use for all the other plastic and net bits, which had begun to accumulate. Then Jorge stepped in. Jorge’s family has been running a functional plastic recycling plant in Ecuador for years, and so naturally, he was thrilled to be involved with a similar project in India.

And thence was set up a small unit on an experimental scale. With zero investment, plenty of goodwill and determination, and a long list of growing volunteers from all walks of life, the project was set in motion. Different kinds of plastics were identified and segregated accordingly, then rinsed thoroughly in big tubs full of soapy solution.

This heap of cleaned trash, was then left to dry, and later, shredded. “It was hard work trying to cut all that plastic manually, with scissors,” Satya remembers with a laugh. “Some days, ten volunteers turned up to help, including two toddlers, who tagged along with their parents…and on other days, it was just a couple of us….”

Then, a fully functional oven was built out of some leftover bricks by Venkat and Adhavan, two young engineers from Auroville. While a friend lent a compressor, some volunteers brought in discarded pots and pans, bowls and cups, from their home, to be used as moulds. And thus began the process of melting the plastic, pouring it into moulds, and compressing them to produce beautiful bowls, cutting boards, coasters, wall hangings, chess boards, and several other objects, with swirls of melted plastic imprinted on them. “It was truly exciting to see one’s hard work and vision come to fruition,” exclaims Satya, adding, “Imagine, had we just sat around waiting for funds, we would still be writing proposals, and waiting endlessly….”

This is not all. With the group aiming to use a 3-d printer to create everyday objects out of the amassed recyclable plastic bits, the sky is the limit.

The zerowaste team was delighted that a few local lads were inspired to help them in their endeavour. “Today, we had a new member join our team – Shyamkumar. He is only sixteen, and has been cleaning up the Kanagan lake in Pondicherry for the last two years,” says Satya, a sense of awe clearly audible in his voice. For, to him having such volunteers in the team only translates into one thing: Hope for the future!