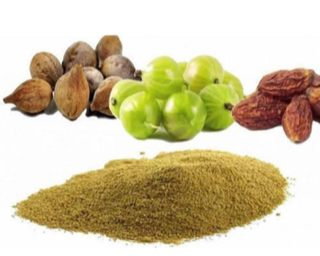 REENA SINGH extols the virtues of Triphala churna, an age-old Ayurveda remedy that combines the powder of three dried fruits in equal quantity

Back in the early ‘70s, my father had a ritual of having a teaspoon of triphala powder with warm water after dinner. He would tell us that it works wonders for your bowels, but none of us were convinced. For one, it was bitter (kadhwa is a better word). For another, here we were in the beginning of the rock ‘n’ roll era and who was going to have something recommended by our grandparents, fathers and mothers?

But as the decades passed and I got older and wiser, I took to Ayurveda in a big way, especially after I was despatched by my newspaper to Rishikesh to cover an Ayurveda conference in February 2011. What I learnt there was an eye-opener. I returned home, changed from the inside out.

From then on, I was game to try all kinds of strange powders, concoctions and remedies. Ayurveda found a place both in my home and heart. I now did exactly what my father would try with us 40 years earlier, but this time around, too, the family found my Ayurveda cures suspicious.

I also discovered two gems – Dr V Vasudevan from Arsha Yoga Vidya Peetam Trust, Coimbatore and the handsome gold medallist from BHU, Dr Parmeshwar Arora. Both soon became my go-to doctors whenever I had a health problem. The former is a traditional Ayurvedacharya from the guru-shishya parampara and with a dazzling international following, while the latter is a savvy, TV and media personality who for years was a part of the Holistic Health Centre at the Gangaram hospital.

I am glad to report that now Triphala is a staple in our household – and most of the family take it too! On the recommendation of yet another Ayurveda doctor, we take three chutkis of triphala with warm water on one day, followed the next day by the same concoction to which a half tsp each of isabgol and flax seed powder has been added.

If you research the wonders of this powder on the Internet, you will find loads of information. It has finally found pride of place in the West, too. Recently, Susan Westfall, a researcher at the McGill University biomedical engineering department in Montreal studied the effects of Triphala in a scientific experiment. Her amazing research work on the benefits of triphla is published in Nature magazine.

Our Gut, Our Second Brain

Ayurveda believes that our health depends on how efficiently our pita, the fire element in our stomach, works. It believes that if we have digestive issues, we are in for trouble. The gut in Ayurveda is called the seat of the nervous system; Western medicine is now inclined to call our gut the second brain.

Study of the gut microbiome in healthy old folks who live to be over a 100, shows that their gut microbiome is healthy and absolutely different from people who are far younger and are riddled with ailments. If you suffer from bloating and gas, constipation or any form of IBS, you know you have a problem. Youngsters, too, these days often suffer from digestive issues, including constipation, bloating, belches and burps.

A Cure for Eye Diseases

Try Triphala if you have any of the above complaints. It’s a tried-and-tested, economically priced remedy to repair your gut health. As its name suggests, Triphala is a combination of three phala or fruit – Amalaki, Haritaki and Bibhitaki – all polyphenol-rich fruits that promote health and rejuvenation. Not many know that triphala when mixed with warm water is a great curative remedy for your eyes, including ailments that have no cure in allopathy.

You have to soak a spoon of triphala churna in warm water and mix well, then allow it to cool before straining the triphala water through a fine cloth or sieve. Then, fill up eye wash cups that you can buy from your chemist and immerse your eyes in them, blinking all the while for a minute or two. This simple remedy can be the cure for many remedies. But do check with a reputed Ayurvedacharya about the traditional way to do this.

Reena Singh has more than 39 years’ experience in senior editorial positions in The Times of India (TOI) and Genpact. She was Deputy Editor with TOI’s spiritual newspaper, The Speaking Tree, where she spent more than nine years.