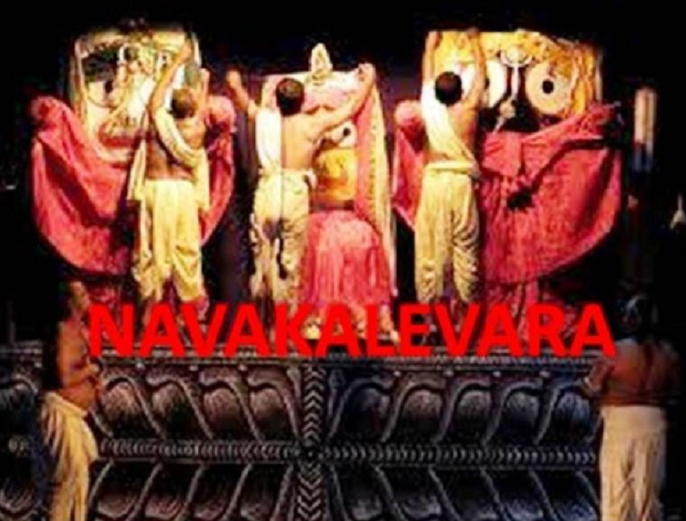 The entire worshipping mode of Mahaprabhu Jagannath is based on age-old Tantric rituals and the whole process is so very mysterious. Mahaprabhu Jagannath leads the lifestyle of a human, living in a family, paying respect to elders, following traditions, performing rituals, yet allowing darshan to His devotees.

His daily activities include brushing teeth, bathing, changing clothes, having breakfast, lunch, snacks and dinner, relaxing with song and dance; and meeting His better half, Maa Mahalaxmi at night when everyone goes to sleep.

As jivatmas change bodies in the course of their journey, Mahaprabhu too changes bodies every twelve years. This ritual is called Navakalevara. ‘Nava’ means new and ‘Kalevara’ means assuming new shape.

The last ritual of Navakalevara  happened in 2015. The next ritual may happen in 2027. The day, time and other logistics are suggested by astrologers specially assigned through generations to offer this seva.

The entire Jagannath culture is a bead of flowering mystic moments, where a devotee witnesses love, power, richness of devotion, vibrating rituals, his heart filled with surrender and gratitude.

In these mystic activities of the Lord, many such moments appear when everything comes to a halt. Everyone, everywhere enters into deep meditation, to remain connected with the Supreme Cosmic Consciousness.

And among all rituals, Navakalevara is a unique one of bidding farewell to the departing bodies and the energetic appearance of a new moment when Mahaprabhu dazzles with new attire.

Thereafter, Mahaprabhu sitting on snana mandapa, with the attire of an elephant (Hathi Besa), gives darshan to His devotees. This is the time when lakhs of His devotees receive the most sacred darshan, standing on the majestic grand courtyard. The Lord falls ill due to excessive bathing and is shifted to a makeshift hospital (anasara griha) for treatment, followed by Navakalevara.

During the unique event of Navakalevara, the entire universe ― the planet earth, the sun and other planets act in unison to meditate on the Lord of the Lords, the Emperor of this Universe. This is the grand play of Cosmic Consciousness.

This event usually takes place in the month of June, in three distinct phases where specific sevayat (servitor) families offer seva for specific services. The first phase is to start the search and find the right location and the perfect tree for getting the wood for making the idols of Mahaprabhu and then bringing the wood by road on a wooden trolley, after proper purification and worshipping.

The second phase is the actual making of the idols, inside the temple in utmost secrecy by a group of sevayats assigned since generations. These sevayats prepare themselves to take up the job by living in austerity for a month, fasting and doing spiritual practices religiously. They put a cloth on their face, covering their mouths and ears and give a shape to the wood blocks in silence, within a defined timeline.

And the third and final phase of Navakalevara arrives at the culmination of the two phases, on the assigned day, when another batch of  sevayats is assigned to offer the Brahma Parivartan seva, blind-folded, when they carry the old bodies to the burial ground inside the temple, completing the final rituals.

On the assigned day of Navakalevara–Ghata Parivartan  (change of Idol’s Body) and installing the Brahma within the idols, the whole temple is purified. All the places of worship that exist inside the temple premises are closed. The temple becomes empty. No one, nowhere, except few sevayats remain inside the huge temple complex.

The four gates of the temple are locked and sealed. All the lights inside the temple premises are shut down. While dense darkness rules in the entire temple premises, there remains only a lone, light pot kept burning on the 22 steps area, near the Sinha Dwara (Lions Gate).

The newly built Vigrahas (the divine represented through a manifest form―idols) are brought into the anasara griha. Four sets of sevayats perform seva for four Vigrahas.

In the deep dense darkness of midnight, the ghata parivartan ― the most mystic and secret activity in the temple rituals, happens.

In this universal darkness, the most sacred moment arrives. The Mahakala rises and subsides in the anasara griha; as if the Lord of the universe transforms time into auto mode, to ensure the unique manifestation happens automatically.

For a few moments, everything, everyone, everywhere comes to a pause; as if the universe, remains connected with the unique moments, in deep, engulfing meditation.

Once Brahma is placed in the new wooden Vigrahas, it is time to carry the old Vigrahas to Koili Vaikuntha, the official graveyard of the temple. After ghata parivartan,it will take nearly another month to complete making the Vigrahas. All these things happen in anasara griha. And once every small detail is accomplished, the new deities are taken to Ratna Sinhasana for Naba Jauban Darshan.

Here starts once again the assigned day-to-day activities of Mahaprabhu with His new body; and thereafter the rituals of the Car Festival starts.

The Lord of the Universe, since time immemorial, has chosen this Blue Mountain (currently called the city of Puri) as His abode, to perform His mystical Manabiya Leela and grant darshan to everyone, throwing His devotees into a trance.

It is said that even to talk about Him, to stay absorbed in His esoteric manifestations, one needs His Grace.

In fact my dear ones, you all and me too, are really blessed to write, read and talk about Him as we perceive Him.

May Mahaprabhu Jagannath kindly pardon me for my mistakes, my timid imagination and limitations in describing His most gigantic, most mysterious and most absorbing Leelas.

Manas Das is a graduate in Law, with a Science & Cost Accounting background from Cuttack, Odisha. He is a well-known poet and writer and writes both in Odiya and in the English language. Hailing from a cultured, humble family and pushed into entrepreneurship, he set up and managed a pharmaceutical manufacturing company for 44 years. He lives with his wife Lipipuspa in Odisha, and is blessed with a son and a daughter.