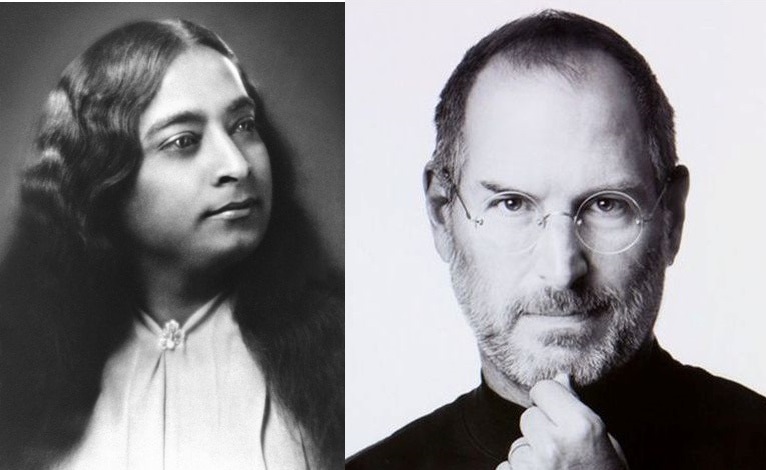 There is, perhaps, no book that has inspired so many famous people as Autobiography of a Yogi by Paramhansa Yogananda. The best known among them is Steve Jobs, who was a business magnate and Chairman, CEO and co-founder of Apple Inc.

Even after death, he carried with him the teachings of the spiritual guru and desired to pass it on to others.

Steve Jobs had left instructions that each attendee of his memorial service be given a farewell gift, which was packed in a brown box.  The box contained the book Autobiography of a Yogi.

Hitendra Wadhwa, Professor of Practice at Columbia Business School and founder of the Mentora Institute, said in an article in Inc.com that one of the attendees at the memorial service was Marc Benioff, CEO of Salesforce.com.

Hitendra quoted Marc as saying, “Yogananda…had this book on self-realization…. [Steve’s] last message to us was that here is Yogananda’s book…. Actualize yourself.”

At a TechCrunch Disrupt conference, Marc recounted his feelings when he opened the box: “This is going to be good. I knew that this was a decision [Steve] made, and whatever it was, it was the last thing he wanted us all to think about.”

Marc said that he looked at Steve as “a very spiritual person, who had this incredible realization― that his intuition was his greatest gift and he needed to look at the world from the inside out.”

Nabha Cosley of Ananda Sangha, which propagates  the teachings of Paramhansa Yogananda,  said in a feature in Ananda.org  titled,  “Steve Jobs and the Autobiography of a Yogi”,  that 500 copies of the book were purchased from Self-Realization Fellowship (SRF).  Founded in 1920 by Paramahansa Yogananda, SRF  teaches scientific methods of meditation and principles of spiritual living.

In 1974, Jobs travelled to India with a friend, Nabha said. But the trip turned out to be a disappointment.  Jobs later said that he realized “We weren’t going to find a place where we could go for a month to become enlightened.”

But Jobs’ disappointment didn’t make him quit his quest for spirituality.

Nabha talked with Les Kaye, a member of the Los Altos zendo (zen training centre). He said that Jobs was interested in exploring his spiritual self, particularly when he first returned from India. Jobs would take long evening walks with the leader of the zendo, exploring spiritual subjects.

He seemed more interested in the concepts of spirituality than in its outward practice, but his spiritual energy found expression, Kaye said, through his work.

For example, Jobs believed in possibility. “He could invent things that no one had ever dreamed of,” Kaye said. “There were no roadblocks in his mind — nothing that said, ‘Oh no, you can’t do that.’” Some part of him always stayed very open and child-like.

He appreciated inner freedom. “I think if you do something and it turns out pretty good,” he said, “Then you should go do something else wonderful, not dwell on it for too long. Just figure out what’s next.”

Sometimes he used the thought of death to help him stay non-attached. “Remembering that you are going to die,” he said, “Is the best way I know to avoid the trap of thinking you have something to lose. You are already naked. There is no reason not to follow your heart.”

He deeply valued, and trusted, the power of intuition. “Your time is limited,” he said, “So don’t waste it living someone else’s life. Don’t be trapped by dogma — which is living with the results of other people’s thinking. Don’t let the noise of others’ opinions drown out your own inner voice. And most important, have the courage to follow your heart and intuition. They somehow already know what you truly want to become. Everything else is secondary.”

Jobs didn’t have all the answers, though, and was unsure about God and heaven for much of his time on earth.

Towards the end of his life he told his biographer, “I’m about fifty-fifty on God.” He just didn’t know. But every year Jobs would read Autobiography of a Yogi.

At death, perhaps, some things became clearer. The day before he passed away, he told his sister that he was going to a better place.

Autobiography of a Yogi is an autobiography of Paramhansa Yogananda (January 5, 1983-March 7, 1952). Yogananda was born as Mukunda Lal Ghosh in Gorakhpur, UP, India, into a Bengali Hindu family.  The book introduces the reader to the life of Paramahansa Yogananda and his encounters with spiritual figures of both the Eastern and the Western world. The book begins with his childhood family life, to finding his guru Swami  Sri Yukteswar Giri, to becoming a monk and establishing his teachings of  Kriya Yoga meditation.

The book is an introduction to the methods of attaining God-realization and to the spiritual wisdom of the East.

The book  records the establishment of  Yogananda’s first school, Yogoda Satsanga Brahmacharya Vidyalaya to his journey to America where he lectured to thousands, and established  Self-Realization Fellowship . The book then takes you on Yogananda’s return visit to India in 1935 where he encountered leading spiritual figures such as Therese Neumann in Bavaria, the Hindu saint Ananda Moyi Ma, Mahatma Gandhi, Rabindranath Tagore, Noble Prize-winning physicist Sir C V Raman an Giri Bala, “the woman yogi who never eats.” The reader then returns to the West with Yogananda where he continues to establish his teachings in America including writing this book.

Autobiography of a Yogi has introduced meditation and yoga to many Westerners since its publication. The book has many famous advocates, particularly in the business and entertainment communities.

Among them are George Harrison, lead guitarist of the Beatles, who was presented his copy of the book by Ravi Shankar,  King of Rock and Roll, Elvis Presley, and actress Mariel Hemingway,  who said, she was “mesmerized by the Autobiography of a Yogi and loved the whole great Hindu tradition of spiritual seeking.”

Many other accomplished men and women of Yogananda’s era took to his teaching, including the entrepreneur George Eastman, founder of Kodak, the acclaimed opera singer Amelita Galli-Curci, the tenor Vladimir Rosing and the plant scientist Luther Burbank.  Even U.S. president Calvin Coolidge invited Yogananda to the White House for a personal audience.

Yogananda, is, indeed, the father of yoga in the West.