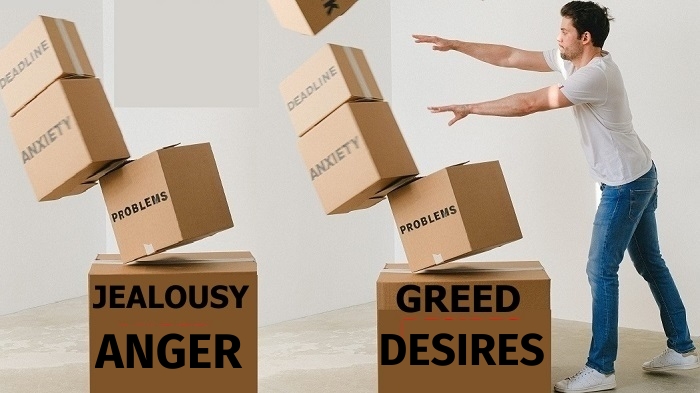 Drawing upon the eternal teachings of the Bhagavad Gita, NITA AGARWAL cites delusional worldly attractions, which could lead to our downfall and suggests ways to safeguard ourselves from a fatal fall, in the ninth article in her series on chapter 2 of ‘The Song of God’.

In the previous article in this series, Bhagwan Shri Krishna had talked about the need to withdraw our senses to protect ourselves from worldly attractions. Our senses, which are prone to attractions, distract and disturb our mind by feeding it with beautiful objects in the world, which is full of illusion.

These attractions spark desires in our mind, leading to attachment. Desires fill our mind with the idea of possessing them. If these desires are not fulfilled, anger begins to rise in our bosom. And our mind spins with undesirable reactions.

Thinking about objects that senses perceive, one develops attachment to them. Attachment leads to desire, and from desire arises anger.

The two verses above are often described as the ‘Ladder of fall’. Even wise people can be taken for a ride by their senses, if they are drawn to the world of objects. When one sees, smells, touches or relishes any object, a strong desire to possess it can be kindled even in an evolved seeker.

Desires lead to negative thoughts such as anger, greed, jealousy and so on, which are like mental ailments. Ignorant and weak-willed as we are, we do not even make efforts to find a cure for these ailments, as we often don’t consider them as ailments.

We think these negative emotions are part of human nature and so will pass away or can be taken care of. But getting rid of such negativity is never easy. For, when we encounter obstacles in owning or enjoying the objects that we fancy, uncontrollable rage seizes us.

This rage destroys the equanimity of the mind and intellect. We then lose the ability to discriminate and make sound judgements in order to take right decisions, as both our mind and intellect become delusional. Hapless, indeed, is our predicament in such a scenario.

The phrase ‘ladder of fall’ is the most apt description for our plight. Even sincere seekers, who are established in the Self can experience the ladder of fall, if they are self-complacent and fail to control their attachment to objects and people.

In the battle of Kurukshetra, Arjun ― an otherwise evolved person ― becomes delusional and confused because of his attachment to his relatives, whom he is to face in the battle field. He forgets his dharma and stands before Bhagwan Shri Krishna like a confused, helpless child.

It is important to understand that control of the senses is never about suppression but turning inwards to seek joy and bliss. This is possible through the route of Bhakti yoga, Karma Yoga as well as Gyan Yoga.

Bhagwan Shri Krishna talks about the three forms of yoga to Arjun to help him to overcome his delusion and avoid the ladder of fall, remaining steadfast in the Self, even while performing his dharma on the battle field.

We seekers should always remain guarded against worldly attractions and attachments in life by focusing our senses on Bhagwan Shri Krishna. When our senses are focused on the Lord, we will never be deluded by any object, howsoever attractive it may appear.