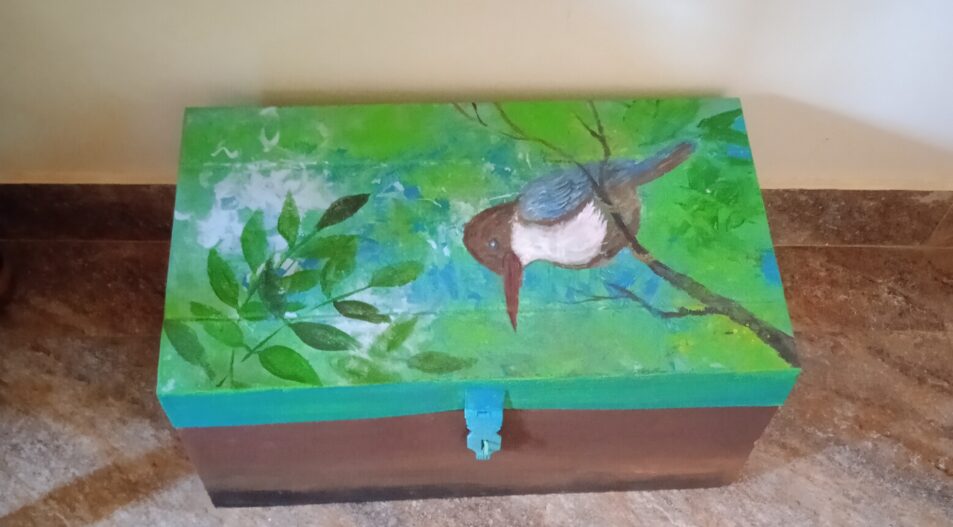 An object gets reduced to junk when it outlives its usefulness. A few days ago, on Earth Day, I rescued our grandmother’s trunk from a dire fate by reclaiming it from the mafiosic violence of an overloaded and chaotic storeroom. And, by the patient process of sandpapering the rusted exterior, and applying a new coat of paint, this 60-year-old 2’x1’x0.75′ hunk of metal was finally accorded a new lease of life. I chose to depict a glamorous kingfisher on the lid because of the bird’s pre-dawn waking habit, a routine which our grandmother observed rigorously until the very end.

This trunk accompanied our grandma wherever she went — on visits to one of her seven sisters or her own children. In the latter case, it was mainly to help manage a newborn baby and organise the many festivities which revolve around a birth. If any occasion demanded her diligent presence, she was there. One would hardly notice her as she moved around unobtrusively like a slow, stealthy shadow, attending to a thousand chores, all at once.

The trunk contained all she had: a few white cotton sarees, neatly folded, some blouses, a woollen shawl for winter, and a paltry sum of money which she would have liked to invest in the stock market. Black and quite ordinary, it was a heavy little thing and it seemed almost laughable that its contents should have been so lean and simple. That was just the way she was.

Beyond a smile and a quick, ‘Namaste Maaji’, I don’t think we ever indulged in any kind of  significant conversation. I can conjure up a couple of reasons which might have given way to such reticence. First, I didn’t understand the dialect she spoke, and second. speech was not her forte.

Overwrought and bent at ninety degrees, she moved around the house straightening things or mending a torn dress, fixing a button, hemming a skirt…folding the laundry in a way that it wouldn’t need ironing…she always found something to keep herself busy. In an era where televisions did not boom across one’s living room and the radio was the only means to set the time on one’s watch and listen to the news on All India Radio, we never found her marooned on the island of boredom, wondering what to do with all those hours in a day. She had a bag full of unshelled watermelon and cantaloupe seeds which she would collect, clean and sun-dry in the long summer. If nothing else, she would sit down with a pair of tweezers, gently squeezing out the seeds, popping them open, then extracting the kernel inside and storing it in bottles, to be later roasted with salt, or to be used as garnish for festival sweets.
In the 1930s, in the big haveli built by our grandparents, where our father and his three siblings were born and brought up, our grandmother’s day began with grinding the daily quota of wheat in a quern-stone and weaving cloth on a spinning wheel, two disciplines which she, along with several women of her generation, had adopted, overtly as an expression of self-reliance, and covertly as a way to revolt against British colonialism. And, this was the usual beginning of a long day, which, for her, usually kicked off at 4 am. Waking up early meant being able to sweep the house, mop the central courtyard, start the fire in the kitchen and dive into her usual set of tasks before the rest of the household yawned and stretched itself awake from its nocturnal rêverie.

Relentless in her pursuit of perfection, she went through her day, tirelessly, yet never did she thrust any expectations on anybody. She was the epitome of a Karmayogi in herchosen spiritual path. Following the ‘yoga of action/work’, to her  work was a form of prayer.

“Last scene of all

That ends this strange eventful history,

Is second childishness and mere oblivion;

Until she breathed her last, not only did she have all her senses together, but much, much more. On this Earth Day, I remembered her as someone who treaded so softly upon the ground that we didn’t hear her pass, nor when she passed away in her sleep…yet a small trunkful of quiet memories remain in a remote corner of the mind, lingering.