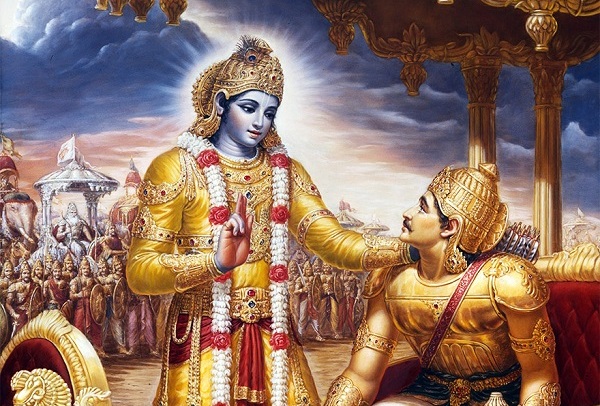 Inspired by the wise words of the world’s greatest teacher, Lord Krishna, NITA AGARWAL explains the futility of grieving over death in the fourth article in her series on Chapter 2 of the Bhagavad Gita

Seeing that Arjun is still not showing any sign of getting over his delusion and grief over death, Lord Krishna changes His mode of teaching. The Lord adapts His teachings to the material world that human beings are all so familiar with.

Human beings generally understand and perceive issues through inputs received from their sense organs. Humans also learn better through repetition and reminders, before the concept sinks into their mind and intellect. Therefore, Lord Krishna repeatedly reminds Arjun why he should not grieve about anyone’s death.

The material world is one of objects and experiences. As humans have evolved so has the language used to describe or express forms and the quality of things, one sees or feels.

But in the evolutionary process, humankind has risen over the material world ― in fact, transcended materialism. It is in this higher state that one can understand that the Self, which is Nirgun (without qualities), Niskarmaye (without action), Singular (without a second) is indescribable in (human) words.

In an exalted, spiritual state, words fail to describe the Absolute Being (ness) or Pure Consciousness. Words at best can be a pointer, an indicator, but to really grasp or understand Consciousness, requires a great deal of self effort or a true experience.

Reverting to the material plane, Lord Krishna tells Arjun that if he believes that one is constantly born or dying, a great man like him, so brave and noble, shouldn’t grieve. The Lord emphasises that one who is born is bound to die one day, while, it is also true that (re)birth is certain for one who dies.

We constantly observe or experience that people die due to various reasons, and, as if to fill the depletion of humans, so many new babies are born every day. Death and birth are definite for everyone. For that reason itself, one should not grieve upon the death of any individual being.

Just like while standing in the blazing sun one is bound to experience heat, in like manner, one who is born is going to die one day. It’s the truth that one must accept smilingly without being sad.

Elaborating on the cycle of birth and death, Lord Krishna explains that one is unmanifest before birth and becomes unmanifest after death, with only a brief period of manifestation that one experiences in life. One is born from the unknown and returns to the unknown upon death.

Between the two states, the brief manifested life is like a dream we see playing out. A dream appears real till it lasts, but it wasn’t there before we went to sleep and disappears once we wake up.

We never grieve for our dreams, because upon waking we realise it was unreal. What we perceive with our senses today in the manifested world becomes unreal on Self-Realisation. By this logic alone, where is the need to grieve for what we perceive today, since it’s not going to last forever?

The Eternal Self is infinite, all-knowing, ever-blissful. In contrast, when we experience the finite self, we feel miserable and are assailed with ignorance about what happens before birth or after death. As we fail to fathom the everlasting spirit within us, our real nature or Self remains almost illusory, like a mystery.

Gurudev Chinmayanandaji has described this predicament of humans, beautifully and succinctly: “Man awakened to Self’s Glory is God; God forgetful of His own glory is the deluded man.”

Therefore, one needs to have a God-like persona to know the Self. That’s why we call enlightened beings God-like. However, most of us are in a miserable state of mind, because of our ignorance or lack of knowledge about the Self.

Indeed, only when we experience Oneness with the Self, would we become worthy and capable of imbibing that joy and wonderment that comes when we reach the peak of sublime, spiritual levels.

Elaborating on the concept of Oneness with the Self,  Lord Krishna says that the In-dweller(Self) in the container (body) is indestructible. Only the finite (body) perishes and goes back to panch tatva upon death, while the Infinite Self lives on. Isn’t grieving over death, therefore, an absolutely futile exercise?