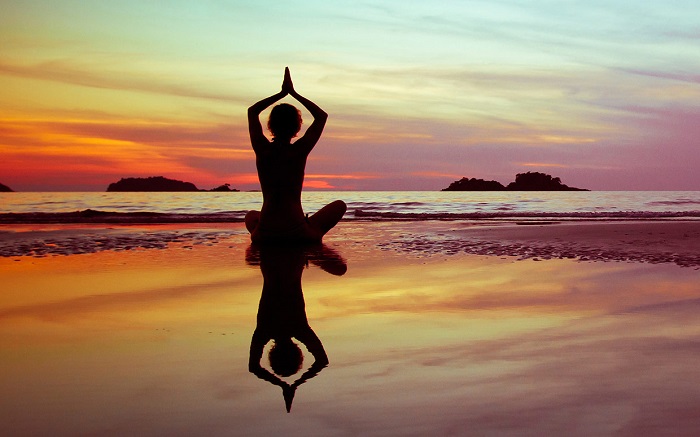 The real art of living lies in the route of Karma Yoga, which Lord Krishna  advises, is the path for not only Arjun but for all of us to follow, says NITA AGARWAL in the sixth article in her series on Chapter 2 of the Bhagavad Gita

Lord Krishna explains to Arjun how Karma can be elevated to Karma Yoga with the right attitude and devotion to work. Arjun was on the battle field, the scene of action and he needed to understand why he must take part in the war. But it was important for Arjun to act ― in this case, take part in the war― with wisdom and a calm mind.

Like Arjun, we all need to understand the significance of Karma Yoga. In this regard, we should perceive that there is some identity between the sinner of the past and the sufferer in the present. Our mind and intellect that carry past impressions ― of past lives or karma already performed ― project our tendencies and thoughts behind our actions at any given time.

Because of negative tendencies, we whine and weep when faced with suffering, and find comfort in blaming circumstances or other people for our woes. However, a purified mind sees no reason to weep even when tragedy strikes.

Most people suffer due to the pair of opposites we experience in life. Pain and pleasure is experienced by the intellect, success and failure by the mind and fear of loss and gain by the physical body. A person (yogi), who can detach oneself from body, mind and intellect (BMI), will not feel suffering ― the reason being that suffering belongs to the BMI.

Guru Chinmayananda explains the phenomenon with an analogy of a vessel made with an alloy of copper, tin and zinc. If all three metals are taken away, then the vessel will cease to exist. In like manner, if any human is able to go beyond BMI, then that individual will rediscover the Self. The limited identity provided by BMI will no longer exist.

To go beyond BMI, one has to get over the pair of opposites, mentioned earlier, and be established in the Self to experience unmitigated bliss. But how does one go beyond BMI? The answer lies in transcending the three Gunas ― Sattva (goodness, calmness, harmony), Rajas (passion, activity, movement) and Tamas (ignorance, inertia, laziness).

Lord Krishna explains how due to endless desires for a favourable result to our actions, the mind is flooded with thousands of thoughts that run amok, making us very anxious. Single-pointed devotion to work is not possible with an anxious and fearful mind, which loses focus. As a result, success becomes elusive.

For example, a cricketer who is anxious to score a century to seal his place in the team, can get out on the next ball, as with an anxious mind, he can fail to read the delivery bowled at him. A sportsperson is more likely to be successful if he focuses on the game itself and not on the final outcome. Similarly, a sculptor can make a wrong cut if his focus is not on the part of the body he is sculpting, but on the final statue or idol.

Lord Krishna says that all actions and rituals that are performed for getting a rich and heavenly life, diminish the discriminative power to distinguish between the real and the unreal. One becomes delusional because of attachment to visible material possessions in life that are temporary in existence and never give lasting peace or joy.

Karma Yoga which prepares the mind for Nishkam Karma (selfless or desireless action) helps one to connect with the Self, while living and performing actions in the material world.

In this context, we should understand the role of the three Gunas ― Sattva, Rajas and Tamas ― present in all human beings. Lord Krishna says that Arjun should remain forever in Sattva Guna ― the subtlest and purest of the gunas ― and free the Self from the pair of opposites, while performing any karma or action.

By being established in the Self and remaining in Sattva Guna, one rises above a delusional and agitated mind. Most of the time, we tend to perform actions to acquire something. Then our endeavour is to retain or preserve that acquisition. One should get out of actions aimed at acquiring and preserving things.

Lord Krishna explains how when one is established in the Self and is beyond the pair of opposites that plague the BMI, even knowledge of the Vedas becomes meaningless. For one who has become a seeker of truth, rituals for satisfaction of desires have no importance whatsoever.

What we derive from them is limited or finite joy. On the other hand, experience of the Self gives infinite joy. The satisfaction that we get after fulfilling one desire, soon ceases to give pleasure. We then hanker after another desire, which we seek to fulfil.

Verse 47 of chapter 2 of the Bhagavad Gita is the most important and the most quoted. In this verse, Lord Krishna tells Arjun that he or any human has the right to work only, but no right to its fruits. Let the fruit of your action not be your motive, the Lord says. That doesn’t mean that one should become attached to inaction.

The real art of living lies in the route of Karma Yoga. In the first chapter of the Gita, Arjun was complaining to Lord Krishna about the futility of fighting the war and how he saw no good coming out of it.

His mind was focused on the outcome of the war and what he imagined was not pleasant for his mind. His agitated mind caused delusion and confusion in his psyche.

Lord Krishna then stepped in to save Arjun and after explaining the true nature of the Absolute Self, He reminded him that he must perform his dharma without worrying about the outcome of the war. Arjun had no right to the results of his karma. He only had the right to perform his karma keeping his dharma in mind.

A true karma yogi’s only concern should be to perform any action sincerely and to the best of one’s ability. One has to perform karma as long as one is alive. So inaction is never the option.

Lord Krishna advises not only Arjun but each one of us to learn to perform Nishkam Karma as it makes us a Karma Yogi. How one can do this will be explained in the next article.