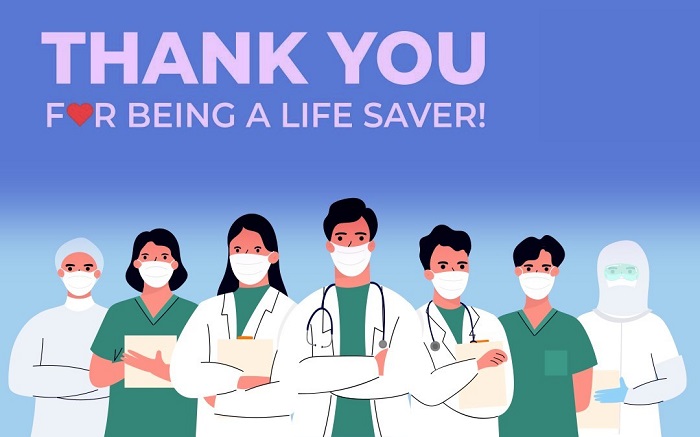 Seeing the visuals on media of angry and helpless resident doctors on strike in our national capital New Delhi for a highly justified demand was highly disturbing and distressing.

Our resident doctors have been working day and night as frontline Covid warriors without giving time to their families and their own health. But their demand has not been treated with urgency.

They just want the government to expeditiously appoint new resident doctors who have qualified by virtue of the NEET (National Eligibility Entrance Test) so that more hands are available in the busy, understaffed hospitals to share the workload in these Covid times. Those residents who have cleared their postgraduate exams are no longer employed as clinical residents.

Protesting doctors say they are not against the quotas, but want the court to expedite its decision so that NEET qualified graduates can begin their jobs.

Resident Doctors say they were peacefully carrying out their protests for a month and seven days in front of Nirman Bhawan, waiting for the government to respond.

Doctors have always respected law and order, but the alleged verbal abuses and physical violence by male policemen on female resident doctors openly on the road was extremely shameful and can’t be expressed in words.

Allegations are that not only were the police ruthless, but they also snatched the phones of doctors, and dragged them, reportedly touching female doctors inappropriately. This is difficult for me, a senior doctor, to express in words! It is, indeed, shocking that our Covid warriors are treated with disrespect so openly.

Doctors in our country spend 10-12 prime years of their youth in government service, foregoing all the fun that comes with being young, hardly getting time to take proper care of their own health, appearance, and needs like spending quality time with their families.

As the doctors pass out, the government decides in which village they have to compulsorily offer their services, though there may be no facilities there to put their knowledge to use. If they refuse, they are asked to pay a hefty amount as bond money.

To the impartial observer this may seem akin to bonded labour. Surprisingly, such compulsory measure are only there for doctors, but not for other professionals. Doctors seem to be at the receiving end.

In case of an unforeseen error in judgement leading to something going wrong with the patient, health care workers are physically abused and their hospitals ransacked. The government takes no action or moves to arrest the culprits and passes it off as mob violence, with no particular person being held responsible.

The medical profession is considered to be a noble profession. However, it has been time and again placed under the scrutiny of the Consumer Protection Act. But other professionals like engineers, lawyers and others, who also deal with human safety and services are not scrutinised under this act.

We doctors never discriminate against our patients because of their caste, creed or religion, but treat all equally, maintaining the respect and dignity of each individual who comes to us. Then why are we being discriminated against by the government with regard to service bonds and imposition of limits to our fees and being denied our much needed due demands?

I am praying that better sense prevails and the government understands our predicament and becomes doctor-friendly in their approach to doctors. In these very testing times of the lurking third Covid wave and the rising infections of the Omicron variant in the nation, doctors will definitely give all they have to their profession, but at the same time they need the government’s support.

Dr Pushpa Chaturvedi, a paediatrician with over 50 years’ experience, is an educationist and researcher, with over 100 research publications, mainly on social paediatrics in renowned medical journals. Ex-Professor and Head of Department of Paediatrics, MGIMS Sevagram, Wardha, she is a thinker, writer, poet, artist and a spiritual blogger with over 500 blogs to her credit. Dr Chaturvedi is also a keen traveller, music and nature lover.