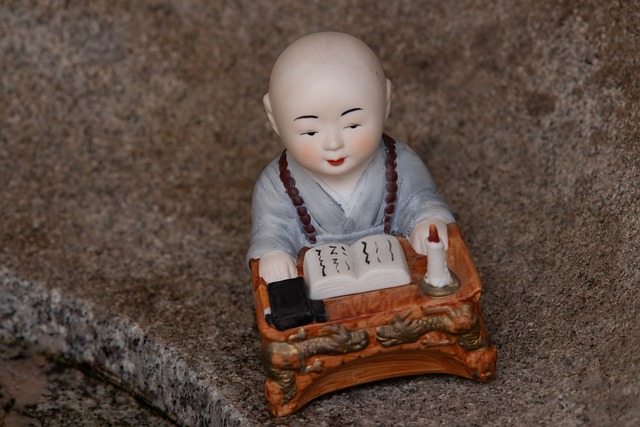 Tonight I’ll be Taking Refuge to become Buddhist. What does this mean? How I approach this ceremony is with a simple understanding given to me by a Tibetan Buddhist shopkeeper who once took me aside, emphatically insisting, “It’s all in your heart!”

The myriad complexities of Tibetan Buddhism all boil down to one simple thing for me. Instead of pursuing enlightenment for only ourselves, we pray for enlightenment for the sake of serving all sentient beings and freeing them from the wheel of samsara.

This reminds me of one special sentient being, a tiny insect who lived and befriended me at an intensely lonely time in my life. I was holed up in an apartment, acutely ill. I only weighed 83 lbs. and was losing more weight every day because doctors hadn’t yet diagnosed what was making me ill.

Frustrated, they’d actually given up trying.  I could never be certain I would wake up the next morning. Perhaps I’d given up, too. Until someone very special came into my life to remind me to keep living. It was a little bug, the tiniest little winged insect, about the size of a fruit fly, who befriended me.

I first discovered him in the kitchen seeking food. Most people kill little insects in their kitchens. But I decided to feed him. And that was the beginning of an unforgettable friendship. The tiny thing seemed aware I was helping him. And he returned my affection with enormous love.

We began talking. Or, rather, I’d talk. Then listen for his response. I told him how sad I felt being given up on. He let me know I wasn’t alone. No, bugs don’t speak in words. But the joy I felt seeing him, enjoying the details of his fine body held aloft by even tinier wings brought happiness to my parched soul.  And although I can’t explain it, we communicated heart-to-heart and understood one another perfectly. He flew around the kitchen as I poured out my soul, feeling heard.

Eventually, he discovered there was a window and flew to it from the kitchen, aching and longing, I suppose, for freedom. There was a screen and although I could open the window, he had to find the screen. Not wanting him to starve, I continued feeding him bits of fruit, calling him “My beautiful little fruit fly.” How long can these insects live? What is their lifespan? I knew it could not be long. We cherished every moment together and communed in inexplicable ways.

He struggled to get outside, bopping up and down with gossamer wings as we both longed for freedom. I finally had someone to talk to and he assuaged my loneliness by understanding. I actually felt compassion ― not just for him, but from him! My eyes well up with tears remembering this now.

Only a few days later, while asleep, I had a dream where the tiny insect flew from the window to me, saying good-bye. When I awoke, I knew he was gone. By the time I reached the window, it was too late. His delicate body lay still on the windowsill, wings closed for the last time. He was free. This was years ago and I have never forgotten my darling fruit fly.

Tonight, when I take Refuge in the Buddha, the Dharma and the Sangha, I will remember him when the time comes to vow my commitment for the benefit of all sentient beings.

Because one tiny Buddha with wings gave refuge to me.

Chana “Hana” Meddin is a lifelong meditator, nature photographer, artist, and wildlife advocate. She has written for the Times of India’s ‘Speaking Tree’ and has a story published in Oswald Pereira’s book, ‘How to Create Miracles in Our Daily Life.’ She lives in Seattle with her cat, Annabelle Fluff. They both enjoy yoga.