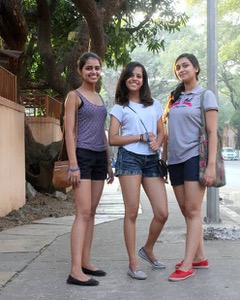 Do you fall apart when you have to take a tough decision regarding your children that has no clear-cut right or wrong answer? REENA SINGH examines moral dilemmas in urban Indian homes that are becoming increasingly inevitable

Moral dilemmas – sometimes minor and at other times, major — such as whom our children should marry; whether we should turn a blind eye even when we know they are deep in a relationship; whether we ourselves should look for a little welcome flirtation outside the marital home; whether we should let our daughters bring home their boyfriends; and look the other way if a surviving elderly father, say in his early 60s, is looking for companionship and is happy chatting up the elderly smart widow who lives down the lane?

The question here is simple. Should we move with the times and accept these situations as inevitable or should we clamp down on them as moral transgressions and uphold some of our Indian middle-class values which need not necessarily be upright or correct all the time?

It is easy when dilemmas are more simplistic — such as should you allow your thirteen-year-old daughter to don spaghetti straps or a hanky top and team them up with tiny colourful shorts? She looks so cute in them is what you think one minute, while the next minute you wonder if this is going too far. What will the neighbours say, you ask yourself silently, sometimes in despair. Then you give in, saying it is okay to wear them on a vacation to some exotic locale but not on normal days. Sounds familiar?

As facebook uploads, twitter and Instagram bring photos of your friends, family and celebrities for your private viewing pleasure at all times of the day or night, and you catch yourself effortlessly zooming in voyeuristically, you wonder if you are right in not letting your smart teen wear similar clothes such as the ones Sara Ali Khan, Kareena Kapoor and Deepika Padukone wear. After all, don’t you yourself often hit the like or watch button adding to their lakhs or millions of views on social media? Surely, if so many people love to see stars and your friends on facebook in smart, skimpy clothes, why would you not want your daughter to have her share of likes and loves on social media, too?

Then again, while you may breezily tell your adult son in a discussion on sex that he needs to go find himself a girl, you will perhaps not say the same to your daughter! And if your granddaughter in the US can go hiking with her American boyfriend, isn’t it unfair to disapprove of your other granddaughter in India who is merely asking for permission to go trekking in the Himalayas with her usual mixed gang from college?

Once you introspect, you will realise that your concerns are not so much about morality as they are about keeping up appearances in your social circle. Isn’t it time then, to move with the times? In such situations, take yourself back to the time when you yourself were in college and you will remember soon enough that everything that is being done now was also being done back in the ’70s and ’80s — except that families kept all of this under wraps back then, and things are done more openly now.

When it comes to a clear toss-up between right and wrong, it is easy to take a decision. You choose what is right, and that’s that. But the decision becomes difficult when it is the grey zone you are trying to negotiate.

But don’t let every decision take its toll on your peace and health; sometimes, situations just solve themselves. It might even be a good idea to let your daughter bring her boyfriend home and perhaps even staying over — for it gives you the chance to get to know the young man better and decide whether he is a good family fellow without evil designs on your little innocent daughter.

Similarly, look the other way if your ageing and surviving parent has a friend to spend time with in the evening. It will make your mother or father feel less lonely. No harm in that, is there? And if they get more serious and wish to be together for companionship, why would you have an issue with that? Won’t you be impinging on their independence if you try and overrule their point of view?

Sometimes, it is just more sensible and logical to accept changing needs as part of life.

Photo by Darina Belonogova from Pexels