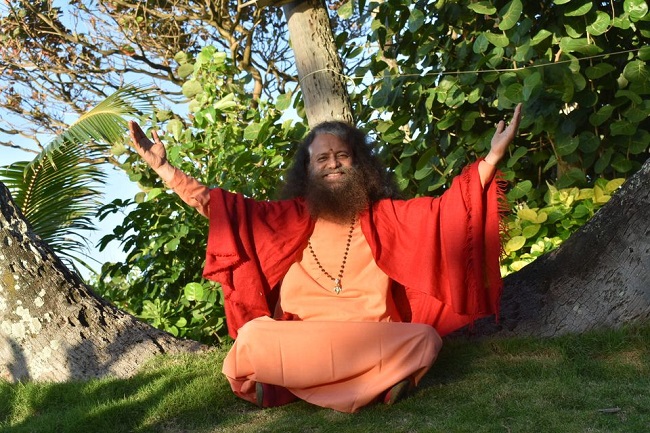 The Earth is here to sustain our life, not for us to extinguish Hers. Yet, through the way we are polluting the air, the water and the ground, that is exactly what we are doing, says SWAMI CHIDANAND SARASWATI

Everything we use which is not biodegradable ― each item, each piece of packaging, each container, each garment ― will someday end up taking precious space in our Earth’s landfills.

Further, the manufacturing of everything we use generates a huge amount of waste that is dumped directly into or onto our Earth. We may hold a small Styrofoam cup filled with tea or coffee in our hands and think, “It’s not more than a few ounces, a few square inches in area. It won’t have that big of an effect on the Earth.”

However, we have to trace back the genesis of the Styrofoam cup to its roots. Only by seeing the full amount of resources used in the production, manufacture, transportation and sale of this Styrofoam cup can we grasp its global impact. This, of course, does not mean that to live peaceful lives we should never purchase or use anything. It simply means that we need to live with awareness.

It means, in continuation with our Styrofoam cup example, that we may decide to purchase a small, personal, insulated travel mug (which are available everywhere these days) which we can fill with the beverage of our choice rather than throwing away paper, plastic and Styrofoam cups every time we purchase a drink.

Through being constantly aware of the impact of our choices, we will see innumerable areas where we can make decisions that generate peace rather than pieces for the Earth on which we live.

Another serious area in which we pollute the Earth is through our dependence on toxic chemicals for everyday needs. Detergent, bug spray, cleaning supplies, fertilizer, insecticides ― all of these are filled with chemicals that are poison for us, poison for our children and poison for the Earth into which they eventually seep.

When these chemicals soak into the soil and groundwater or get carried on the wind, they affect and infect agricultural fields where our fruits, vegetables and wheat are growing.

The level of toxins in young children living in industrialised societies is not only far higher than those in undeveloped, rural areas, but it is significantly higher than any governmental or health organization’s recommendations. Why? Our children are not swallowing bottles of toxic chemicals. How is it getting into their bloodstreams in such alarming percentages?

The billions of tons of industrial, toxic and household waste that gets dumped into the oceans each year has led not only to a significant and tragic depletion of marine life and a desecration of the undersea eco-system, but also to a sharp increase in disease among those who consume fish or any oceanic products.

Worse than our own personal, household chemicals being dumped into the water is the toxic chemicals dumped by factories whose goods we are dependent. When we purchase, for example, a leather belt, we may be aware of the fact that a cow’s life has been taken for it. However, we may not be aware of the tons of toxins which have been produced by the tannery to turn the flesh of the cow into a belt. In India, the greatest polluters of the holy River Ganga are the tanneries (leather producers). In spite of government sanctions, they continue to dump tons and tons of hazardous and toxic waste into the divine river every day.

Lakes in numerous countries of the world have become so polluted from the untreated, casually dumped waste of nearby factories that crops perish, animals who depend on the lake’s water become extinct, and villagers suffer hunger, thirst, malnutrition and eventually death.

The factories in developing nations which are dumping their waste unconscionably into the water are most likely producing products for export. It is not the villagers living around the lake or on the river’s banks who are purchasing the items whose manufacturing is contaminating their land and water. It is us.

We are concerned about ending the violence between warring factions in countries across the world, as we know that communal violence leads to injury, pain and death.

However, in those same countries, many more people are at risk of death from drinking contaminated water, eating fish whose tissues have dangerously high concentrations of toxins, or eating fruit grown in toxic soil.

If we are truly concerned about bringing peace to the world, we must take a step toward purchasing only those products which have been manufactured conscientiously, responsibly and without causing harm to people, animals or the land.

The Greenhouse effect (the rise in global temperatures due to excessive emission of certain gases into the air) is probably the most serious threat to the Earth and our existence today. Carbon dioxide, methane, nitrous oxide, CFCs, PFCs and other greenhouse gases which are produced by cars, factories, livestock production, and other daily industrial activities are trapping heat in our atmosphere.

That extra heat will not only cause a few-degree increase in global temperatures, but it also threatens to wreak havoc upon the delicate balance of the oceans, forests, icecaps and continents of the world.

In the United States, nearly seven tons (6,350 kilograms or 13,970 lbs) of greenhouse gases are emitted per person each year. Of this, 82% is emitted through fuel that is burned to generate electricity and to run our cars. This means that each person’s use of electrical appliances and a car causes approximately 5,207 kilograms (11,455 lbs) of greenhouse gases to be emitted each year.

The potential effects of global warming are disastrous for ourselves, for the Earth, for all the species that exist on the planet, as well as the possibility of life for our children, grandchildren and future generations. Even a few-degree rise in global average temperatures is enough to injure, disrupt and even extinguish the life of innumerable species of animals and plants, not to mention the human race.

(Excerpted from the book Peace: For Ourselves, Our Families, Our Communities & Our World, published by Ganga Press)

Swami Chidanand Saraswati is the President of Parmarth Niketan Ashram, Rishikesh, one of the largest interfaith spiritual institutions in India. He is co-founder/co-chairman of the Global Interfaith WASH Alliance (GIWA), the world’s first initiative to bring together the leaders of all the world’s faiths to enable a water-secure future.