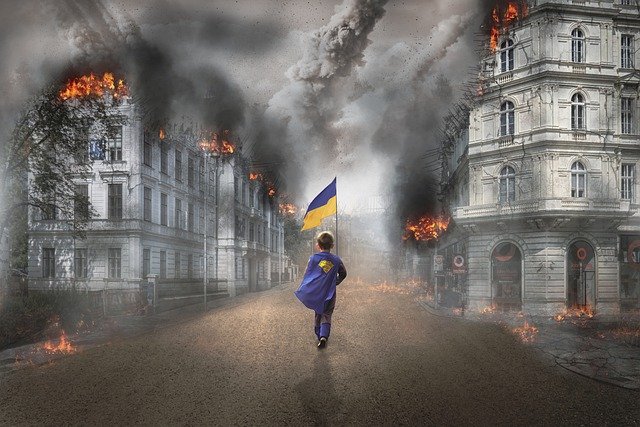 A jumbled dream mingles with the disturbing reality of war and communal tensions that hang heavy in the air prompting writer, poet and artist, SEEMA MUNIZ to pen down her confused emotions

My head hurt. The air, heavy with incongruity, was wired with tension and fears, hopes and prayers. Television channels alternated between the frenzied coverage of the ongoing war in a foreign land and the blaze of communal antagonism and revenge sweeping the home front.

I watched the birds diving and soaring against the infinite canvas of fizzy clouds, abundant in their expression of unsuppressed freedom. A jersey cow, visibly pregnant chose my meagre classic syngonium plant peeking out of the railing, to feast upon over the plethora of wild and indigenous flora strewn across her wayward path. The sun set, gloriously round and primeval.

A Dream: I am drowned, now in a pall of a muddled, subconscious world, in which terror-stricken by some ongoing war, we are coerced into living underwater. Living is an overstatement; surviving is more like it. “Just like a muskrat”, I think to myself. Wind in the Willows comes to mind, and scoots out immediately, chased by the loud music bounding off from the temple a km away. Traveling down the night-infested road, it has managed to incite my eardrums to vibrate. It seems so close, I can almost touch it, and gauge its musty thickness.

As my conscious mind takes the front seat, I realise it is the muezzin summoning the faithful to the adhan from a mosque situated 3 km from where I am…who at this unholy hour could be tempted into seeking salvation?

Again, whirls of sleep take over. World goes on. The wars, the parliaments, The Kashmir Files, sloganeering…I keep sinking and yet something inside attempts to stay afloat, pretending to be a muskrat.

Featured image by ELG21 from Pixabay