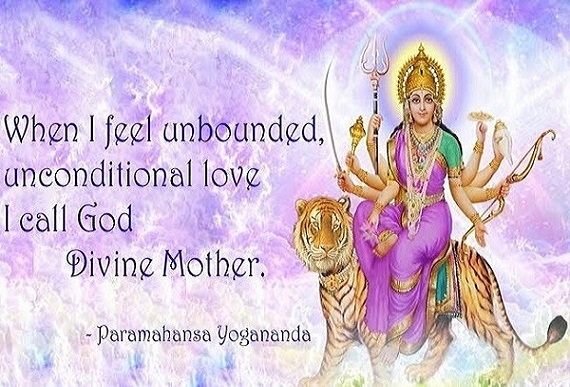 Love of Divine Mother is only love of your own true self, says SWAMI KRIYANANDA

First of all, we need to understand that Divine Mother is not a separate thing or person, but is the feminine aspect of God. There’s really only one reality — the Infinite Consciousness that has produced all the different manifestations we see. But there can be different expressions of the Divine that appeal to people according to their own natures. What we need is more consciousness of the Divine Mother to balance out the overly masculine, intellectual approach that is dominant.

You are Divine Mother

Now, who is Divine Mother? You are Divine Mother.  There can’t be any difference, because there’s no separation in the Infinite. When God brought this universe into existence, He could only do it out of His own consciousness. He had to dream it into existence. The beauty of this thought is that all the love of the universe is also a part of you.

What part does Divine Mother play in this? She gives us a form towards which we can direct our love.

Divine love is without limit or form, but human love tends to take the Infinite and condense it into one person. This tendency is good in the sense that it gives you a focus for love, without which it would be vague.

We need a concrete concept of God — a beloved, or friend, or wise person — even though He is really without form. Having a concrete image is like having stepping stones that bring us to the point where suddenly we see it’s all Him.

To develop devotion for Divine Mother, in the beginning we often need to think in terms of a human form. When I first came to Paramhansa Yogananda, I was tired of being intellectual and wanted to develop devotion. I began praying to Divine Mother, and used to visualise the face of my godmother. That may seem ridiculous, but she had a very loving nature that reminded me of the innocence and sweetness that I was trying to develop. In this way, I gradually tuned into the consciousness of Divine Mother.

The trouble with worshiping God only as Father is that He tends to present an image of a judge — somewhat stern and aloof. But Divine Mother is filled with compassion, and will forgive you even if you’ve done wrong. Paramhansa Yogananda said, “Pray to the Mother, ‘Naughty or good, still I’m your child, and you must help me.’ ”

Never lose sight of the Infinite

We need the limited to remind us of the Infinite. But even if God should come to you as the Divine Mother, or as a friend, or a beloved, always see the Infinite Consciousness behind those eyes. This is what Yogananda taught us to do. I used to notice with Yogananda that he could be laughing joyfully, or scolding, or teaching, or talking about a pothole in the driveway that needed fixing, but when I looked into his eyes, I saw that there was no personal desire. It was as if the Infinite was looking at me through those eyes.

I’ll never forget once when I was sitting at his feet while he was editing a manuscript, and I was thinking how fortunate it was that I had found him. When he finished his editing, he asked me to help him stand. He looked into my eyes with so much joy and love, and said, “Just a bulge of the ocean.”

As Yogananda wrote in a letter to his chief disciple, Rajarsi Janakananda, “Don’t look just with your physical eyes. Think of things behind you that are out of your range of physical vision, and try to see them. In this way, bit by bit, you will develop omnipresence.” This is how we worship Divine Mother.