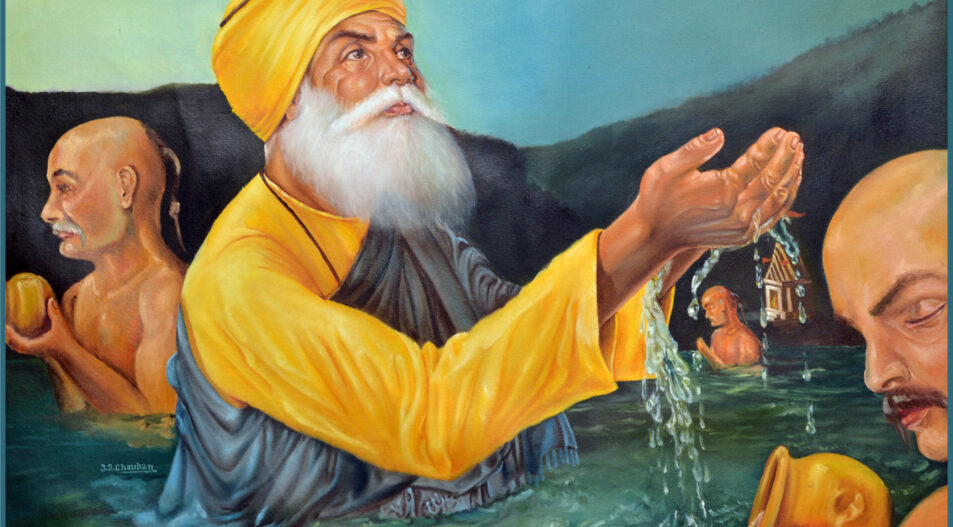 Today, on Guru Nanak Jayanti, the Guru’s message of universal love, equality and brotherhood are as valid today as they were 500 years ago when he lived, says REENA SINGH

The teachings of the much-loved spiritual guru of the Sikhs have a universal and timeless appeal and are as relevant today as they were in the 15th century when Guru Nanak was born. In fact, they have acquired a new significance in these days of communal strife.

The Guru endeared himself to both Hindus and Muslims of that era as he travelled across towns and villages preaching the message of truth, love and peace for over 25 years. His devoted and growing band of shishyas or disciples from both communities finally came to be known as the Sikhs (shishya in Sanskrit is sikh in Punjabi).

Today, November 19, is Guru Nanak’s birthday — and Gurpurab is being celebrated by the 25-million-strong Sikh population across the world. Sikhs visit gurudwaras for kirtan and community langars and listen to discourses on the life of Nanak and his teachings. At night, it is easy to spot Sikh homes all over the country as they are lit up with candles, diyas and sparkling electric lights just as on Deepavali.

Sikhs celebrate Gurpurab with Akand Path, kirtan, jaloos, and langar all over the world. A lakh or more devotees visit Harmandir Sahib, Amritsar’s Golden Temple daily. On Gurpurab, this number is multiplied, but yet there is langar for everyone in the sangat. Last year’s celebrations were muted because of the pandemic, but this year, with more relaxations, perhaps the usual jaloos with the traditional palanquin and Panch Piyaras that give a glimpse of the Sikh faith will go past every town’s main streets and gurdwaras.

The Pakistan link
Guru Nanak’s birthplace was in Sheikhupura district in Pakistan. He was born at his mother’s parents’ home or nanakey, and so was named Nanak Chand. A precocious child, he was more at home studying the scriptures of the Hindus and Muslims, than textbooks! His father would give him money for their trading business, but the deeply spiritual youth would often spend it on feeding the poor and the hungry. He was merely 30 when his consciousness was awakened and he became enlightened leaving home in search of the eternal truth. By this time, he was already the father of two sons.

Interestingly, some 300 Sikh shrines are now in Pakistan, including Nanakana and Punja Sahib. The Pakistan government allows Sikhs to visit the gurudwaras at Nanakana Sahib. There is always a long list of people who queue up to visit the gurudwaras, despite stiff legal and visa formalities of the Pakistan government. This week, the government has once again opened the Kartarpur corridor which facilitates travel to Pakistan by Indian Sikh devotees of Guru Nanak.

We are all one
The words of Guru Nanak’s first-ever sermon were a fervent plea to rid our hearts of animosity towards one another on the basis of religion. He had said: “I shall put my heart at the feet of the one Supreme Being, For we are neither Hindus nor Mussalmans.”

In his 1959 book, The Sikhs Today, Khushwant Singh describes the young Nanak as an intrepid traveler who travelled as far east as Assam, down south to Ceylon, and as far west as Mecca-Medina, singing hymns that tell people that if they want to love God, they should learn first to love one another.

Guru Nanak even travelled to remote areas of India such as Leh, where a simple gurdwara stands sentinel to his travels in the north. Guru Nanak reached there in 1517 along the route of Nepal, Sikkim, Tibet, and Yarkhand. He stopped enroute to meditate by the river at a spot that was inhabited by a local demon who would kill the villagers and eat them. One day the demon rolled down a huge boulder which he figured would fall on the Guru so that he would be dead. But that did not happen. Instead, the stone turned as soft as wax when it hit the Guru and lost its power to harm Guru Nanak. The demon was shocked and realising the holy powers of the saint before him, he agreed to change his ways and live a life of service.

The boulder is preserved inside the gurdwara at Gurdwara Pathar Sahib in Leh in Ladakh. Like this gurdwara, there are several iconic gurdwaras established along the route traversed by the saint and to this day, these are established pilgrimage spots that disseminate the timeless message of Guru Nanak.

Nanak was accompanied on his travels by Mardana, a wandering Muslim minstrel of a low caste, and Bala, a Hindu peasant. The trio sang hymns that suggested answers to the major religious and social problems of the day. His crusade was, however, gentle — without anger, violence, or recrimination and was against fanaticism and intolerance. Nanak pointedly opposed the meaningless rituals and discrimination against caste and sex that went by the name of religion in those days. Several stories are built around the Sikh oral tradition and merged with some historical facts to form Janamsakhis, believed to be written a couple of hundred years after the lifetime of the guru. The Janamsakhis keep the miraculous tales alive and illustrate the lessons in these parables.

Sikhism, is in fact, an amalgamation and reconstruction of the true tenets of Islam and Hinduism and preaches universal humanism, truth and equality. Most important, it teaches that there is only One God.

By the end of his travels, the Guru had come to another conclusion — that people could be united better by a seer or sage who lived among them rather than by a religious head who lived in seclusion. And so it was that the last years of his life were spent once again with his family at Kartarpur, even as he addressed huge congregations, sang hymns and preached about a unified country.

There is an anecdote about his death in 1539, when his body became a subject of dispute between Hindus and Muslims. One community wanted to cremate him, and the other sought to bury him! It is not without reason that he is known as Guru Nanak Shah Fakeer, Hindu ka guru, Mussalman ka peer.