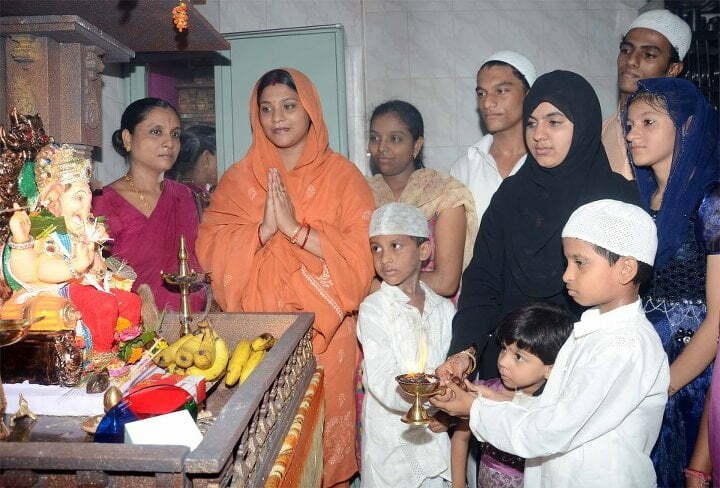 Analysing the reasons for religious conflicts, SEEMA SAXENA suggests that we must cease arguing with others’ religious beliefs right away; she cautions that mixing politics and religion is sure to bring some serious consequences

All over the world, conflict is often attributed to religion. Indeed, this statement seems to be so true. But in order to understand it, we must first analyse what religion actually is and trace its origin.

Historians say that the earliest hunters and gatherers in the Palaeolithic era had discovered the advantages of community living. Over time, the leaders in the community developed guidelines for living together. However, there were several issues that the leaders failed to resolve, despite their best efforts.

Looking Back in History

Finally choosing to deal with them with great prudence, the leaders formulated the dos and don’ts of community living. It was not long before that rituals were created to ward off evil powers and to evoke favourable outcomes from unknown forces.

These rituals were passed down from generation to generation, eventually evolving into beliefs or faiths. The majority of the beliefs concerned unexplainable life forces that existed outside of human control. Eventually, the idea of God came forth ― as the creator, sustainer, and destroyer of the world.

And with God on the horizon, descended avatars, prophets and sages like Buddha, Mahavira, Christ, Muhammad and Guru Nanak, with their stream of followers seeking wisdom and understanding of life from them. The followers looked up to them for answers to their purpose and goals in life.

The availability of resources also influences how humans think. Scarcity can make them think in an aggressive manner,  while the abundance of natural resources fosters the feelings of generosity and compassion. The battles humans wage everyday mould their minds to a certain type of behaviour. Humans learn several lessons from their daily routine, which influences their future, which in turn shapes their philosophy of life and religious beliefs.

Lessons in life and beliefs were initially passed on over generations verbally. After people mastered the skill of writing, they were collected into belief books, also known as religious books. All religions though different in their beliefs acknowledged a superpower or unseen being, whom the human race regarded with awe and respect. Humans learned through experience that a righteous way of life, love, and compassion breeded positivity and goodness.

Humankind realised that virtues and moral ethics were essential to  comprehend God and the mysterious forces in life. They also discovered that power should be exercised in a responsible way. Therefore, every religion listed down norms to live harmoniously.

In the modern world, however, conflicts emerged when various religious groups living together in one place started fighting over their respective beliefs.

Religion in the Context of Existence

A community’s practice of religion comes naturally. It discusses how to handle life’s challenges. Having confidence in a higher entity that controls our life is only one aspect of religion. It is more of a guide on how to live in the presence of omnipotent, enigmatic powers (natural, cosmic, spiritual). Religion aims to unlock our potentialities to become perfect humans ― yet we get so wrapped up in the rituals that we generally lose sight of this objective.

Over time, various groups have invaded the space of their fellow humans in an effort to establish their dominance and seize control of resources with a vengeance that is aimed to completely destroy their fellow beings. These invasions caused irreparable damage to the psyche of those who were invaded.

It is presumed that if we do not protect our belief systems, they will vanish entirely from human history. Although nature and history have repeatedly proven that adapting to a new environment was a better method to save our own species than making a show of strength, we used our combined might and interfered with nature’s ability to run its course. We are impatient and impetuous.

Vindictive activities are repeatedly being committed against members of religious groups in an effort to make up for prior humiliation.

Religion in the Modern Era

Why should we fight over trivial religious issues and endanger our planet, our home, when our world is telescopically expanding further than our solar system?

A few changes must be made in order to put a stop to this discord. We can quit engaging in superstitious rituals with the help of reason and science. Changes must be implemented boldly and with an open mind. It makes sense to assume that when someone relocates to a new country, they will have to make adjustments to their daily routine.

Thoughts may not alter, but clothing and eating habits often do. One can successfully integrate into a new setting without changing one’s essential ideas. In other words, even without the religious rituals, a Hindu, a Christian, a Sikh, or a Muslim remains just that.

Religion cannot be disowned because one is born into it, just like one’s parents. By the time one matures, religion has already made a mark on one’s thoughts and ideas and is ingrained into us by our circumstances.

It must be acknowledged that we must cease arguing with other religious beliefs right away since we have entered a modern scientific age. We must emphasise the importance of living in harmony with the environment instead.

We need leaders who can persuade us to change our opinions. Undoubtedly, we need a fresh outlook. Although science and rationality can help us see through religion, religion is deeply rooted.

Humans are unable to combine the past, present, and future into a single object of observation. In our lives, the present is always the most important thing. In order to abandon antiquated and unscientific methods, we must create a visionary outlook.

Religion is a personal affair and mixing politics with it is sure to bring some serious consequences.

Seema Saxena is an avid writer and blogger who writes about practicality and spirituality in life. She lives in Jaipur.