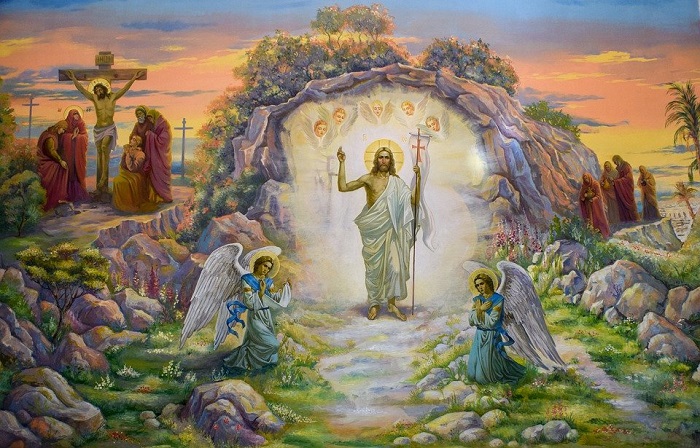 As we celebrate Easter today, which commemorates the resurrection of Jesus Christ, let’s make a pledge to end strife and war and usher in peace and happiness in the world, says OSWALD PEREIRA

From zero to 2.38 billion Christians today ― in around 2000 years ― the world’s largest religion is Christianity, followed by Islam 1.91 billion and Hinduism 1.16 billion. Nearly a third of the world’s population of 7.9 billion people are Christians.

Jesus Christ exhorted his close disciples (apostles) to make disciples of all nations, baptising them in the name of the Father and of the Son and of the Holy Spirit.  The 12 apostles, reduced to 11 after Judas betrayed Christ, were assisted by the newly baptised disciples in spreading Jesus’ teachings.

By ‘make disciples of all nations’, Christ never meant it to be building of a temporal kingdom, but a kingdom of souls belonging to one Supreme Spirit or God. There was never any mention of religion as we understand it today or the word Christianity in the Bible or the Gospels of Christ.

In the first two centuries after the death and resurrection of Christ, there are no records of churches being built.  The earliest identified Christian church is a house church founded between 233 and 256. However, from the 11th through the 14th centuries there was a wave of church construction in Western Europe.

It seemed that Christianity in the first couple of centuries after Christ’s resurrection was not an organised religion with the paraphernalia of pomp and hierarchy. That was how Christ intended it to be, for Jesus was not a ruler but a Messiah.

Born in a manger, he was a friend of the poor and a healer of the sick. He never courted the rich and said, “It is easier for a camel to go through the eye of a needle, than for a rich man to enter into the kingdom of God.”

He preached and practised goodness and purity, and often said, “Blessed are the pure in heart, for they shall see God.”

Christ, believed to be the Son of God, descended on this earth to spread the good news of love and compassion. His crown was not one of royalty but of peace to the human race.

As He said, “Blessed are the peacemakers for they shall be called the children of God.”

Considering the numbers of Christians in the earth’s population, one would have expected peace to have prevailed in the world. On the contrary, in world history all through the ages, nations with a huge Christian population have been leaders in wars.

In the medieval period, crusades, a series of religious wars were initiated, supported and sometimes directed by the Latin Church. In modern times, too, power play and wars by nations with a huge Christian population have disturbed peace, contrary to the teachings of Jesus.

As we celebrate Easter today, which commemorates the resurrection of Jesus Christ ― after he was crucified on (Good) Friday ― let’s make a pledge to end strife and war and usher in peace and happiness in the world.