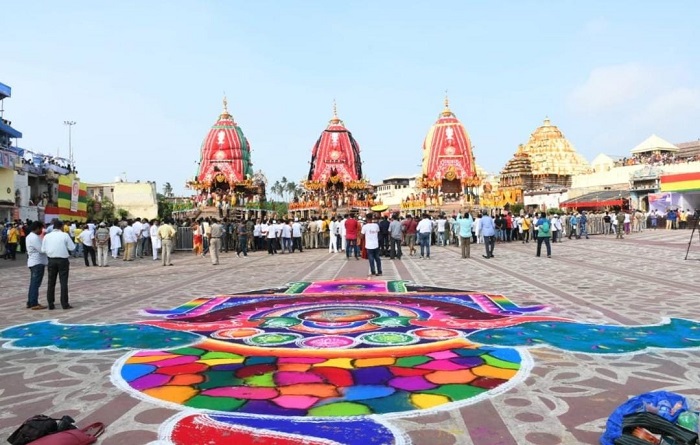 Mysterious are the ways of Mahaprabhu Jagannath, the Lord of Lords, the Param Brahma. When, how and why the Param Brahma, the Supreme Master of the Universe, chose to make Shree Purushottama Kshetra His abode, no one knows.

But the mysterious God is worshipped and is doing His Leela in this part of the universe from time immemorial.

The Skanda Purana and Brahma Purana, two of the Maha Puranas describe the glory of Srikshetra and elaborately discuss the appearance of Mahaprabhu Jagannath, in this blue mountain on the shore of the blue ocean.

The oldest known scripture in India is the Vedas, perceived as supernatural accounts. However, in Hinduism, it is believed that Vyasa categorised the primordial single Veda into four canonical collections.

Vyasa is also credited with the writing of the 18 major Puranas, including Skanda and Brahma Puranas. And from these Mahapuranas, one imagines how Parambrahma Mahaprabhu Jagannath appeared in this part of the universe. Hidden from gods, men and demons, this kshetra was enveloped by Mahaprabhu’s maya and remained impervious to creation and destruction.

The Leela of Mahaprabhu has been on since the last 167 crore years, according to Shri Sachidananda Maharaj, the Head Sanyasi Maharaj of Jhanjapita Math, Puri, owing allegiance to the Madhav Goudiya sect established during the time of Chaitanyadev and Gajapati Prataprudra’s reign (around 15th and16th century), one of the oldest Maths.

In the Skanda Mahapuranas, it is mentioned that the Kshetra was chosen by Mahavishnu as his resting place. As per His desire, a temple was erected for Mahaprabhu by King Indradyumna, the King of Malava during Satya Yuga.

That means Lord Jagannath and his temple at Purushottama Kshetra, existed before the appearance of Shri Krishna (Dwapar) and Shri Ram (Tretaya); and thus the statement of Shri Sachidananda Maharaj seems authentic.

Indradyumna was a king  in the Sun dynasty tradition. During those times, people lived for thousands of years. Some of them who were spiritually elevated had direct access to heaven. Indradyumna was believed to have been born on earth as the fifth generation of Brahmaji.

King Indradyumna was virtuous, truthful, just, and wise. He was an ardent devotee of Lord Vishnu and he knew through meditation that Maha Vishnu is being secretly worshiped by a tribal king Viswavasu on the bay of Nilachala in the Blue Mountain (Nilakandara Parbat).

He sent his minister Vidyapati, brother of his principal priest, with his soldiers to locate these Blue Mountains where Param Brahma was secretly worshipped. Vidyapati while searching for the abode arrived at a forest and met Lalita, Sabara Sardar Viswavasu’s daughter.  Lalita fell in love with Vidyapati and when on the next noon, when King Viswavasu arrived, he met Vidyapati and knowing his daughter’s desire requested him to marry his daughter.

Vidyapati was reluctant as he was already married and asked the king to give him some time to ponder over the proposal. The king agreed and made arrangements for Vidyapati’s stay at his house.

While Vidyapati lived in the king’s house, he noticed some peculiarity in his host’s behaviour. Every night the King would go out, and return the next day at noon scented with fragrances such as camphor, musk and sandalwood.

Vidyapati asked Lalita about the nocturnal adventures of her father. After some persuasion, Lalita revealed that her father visited every night, a secret place for worshipping Sri Nila Madhava. To keep the location a secret, the king always went alone.

To win the confidence of the tribal king, Vidyapati married his daughter and requested the king to take him along for darshan of Nila Madhava. King Viswavasu explained that none other than him could worship Nila Madhava, but nevertheless assured Vidyapati that he would to take him once, where he could have darshan of Prabhu hiding behind the trees.

Later, Vidyapati revealed his identity to the king. Knowing that Vidyapati was a messenger of King Indradyumna, Viswavasu was silent. He was aware of the fact, through his dreams that when the pious king Indradyumna arrives, Nila Madhava will leave the secret place and appear in Shri Kshetra.

However keeping his promise, Viswavasu one night took Vidapati with him to the dense jungle. From a distance, Vidyapati saw Viswavasu remove a big stone on the face of a cave, inside which, a dazzling blue light shone on a smiling baby figure with four hands. Seeing the divine vision, Vidyapati fainted.

Next noon, he found himself in the house with Lalita who described how her father had carried him on his shoulder. Vidyapati was completely intoxicated by the divine aura and said nothing. He lay down in that state for a couple of days.

Then one night, Vidyapati left his bride and the kingdom of Viswavasu for Malava and told King Indradyumna about what had happened. The King, too, through meditation had received the mandate to visit Nilachala mountain and build a temple for Nila Madhava at His desired place.

Subsequently, King Indradyumna with Queen Gundicha and a big convoy came to Nilachala mountain, set up a makeshift palace and went with Vidyapati for darshan of Nila Madhava.

But by the time, King Indradyumna and Vidyapati reached there, Nila Madhava had vanished from the secret place. The devotee in Indradyumna cursed and blamed himself for the sudden vanishing of Parambrahma Nila Madhava.

Indradyumna sat in meditation without taking food and after several days of fasting, Mahaprabhu ordered him to go back to Srikshetra and construct a temple for His residence, where He would appear at the appropriate time.

Indradyumna returned to Nilakandara, Srikshetra and established Utkal Bhukhanda. He invited Viswakarma from heaven and requested him to plan and construct a temple for the Lord.

There he saw a big round log emitting an enchanting scent and sometimes shining like a big white diamond floating on the waves. The king had taken a chariot with him and carried the wooden block (daru), worshipping and performing other rituals, as per the instructions of Sage Narada.

Indradyumna asked Sage Narada who could build the idols of Mahaprabhu. He called for many skilled master craftsmen,  but all expressed their inability to build the idols as no one had ever seen Lord Jagannath.

Narada sat in meditation and later brought an old man from the sea shore who assured that he would make the deity within a week. But the old man had a condition that while he was working, the temple must be closed from outside and no one should be allowed inside.

King Indradyumna agreed and kept the precious daru inside the temple, assigned the task of keeping the temple secure to his wife and directed everyone not to come near the temple. The queen’s guards guarded the entrance and the queen would frequent the temple to ensure that the work was going on by listening to the sound of the hammer and saw from outside.

So the queen sent for Indradyumna and after his arrival, when he too heard no sound from inside, he was confused. The king and queen feared that the old man who had been working without food might have died of hunger.

When the door was opened, there was no trace of the old man. The king and queen found three half-made idols, without limbs. The idols were built up to the waist, with no thighs and legs and incomplete hands.

Both Indradyumna and his queen thought that due to lack of trust and their impatience, the divine making of the Idols remained incomplete. Thinking that he was the cause of this debacle, Indradyumna stopped taking food and remained in penance.

When he was immersed in deep meditation, Nila Madhava appeared in Indradyumna’s subtle vision and ordered him to get out of his slumber and make arrangements for pratistha havan of the temple and installation of the idols in the main shrine.

This ecstatic form of Mahavishnu is narrated in Svetashvatara Upanishad (3.19):

“Without legs and hands, He moves and accepts. Without eyes He sees, and without ears He hears. He knows all that is knowable, but no one knows Him. They call Him the original Supreme Person.”

In confirmation of this assertion in the Vedas, Mahaprabhu Jagannath takes His form without hands and legs. Still, Lord Jagannath is able to accept  56 different types of food, offered eight times daily, and He tours the world in His splendid carriages.

After Indradyumna, many kings have built and rebuilt the temple during the167 crores of years of Lord Jagganath’s existence. Jagatguru Sankaracharya and many saints and sages have visited and built their maths in Shrikshetra. During the last thousand years, many saints of India, including Guru Nanak, Ramanujachara, Chaitanya Deva, Madhabacharya, Nimbarkacharya, Vallabhacharya, Ramananda, Jagannath Das, and Achutananda have visited this sacred kshetra.

A large daily ritual system is followed in the temple. Daily 56 types of food are offered at the temple. The fire in the kitchen is never diffused and prasadam is prepared for lakhs of devotees, daily. The Mukti Mandap Pandit Sabha fixes the thirteen festival dates during the 12 months of the year.

Mysterious Mahaprabhu Jagannath comes out once for nine days from the Sree Mandira with His sister Maa Suvadra and brother Balabhadra and majestically travel to Gundicha temple riding on three big chariots. During the festival, He gives darshan to entire humanity, deities from heaven, gathered on the grand courtyard coming from different parts of the universe. This is known as car festival Rath Yatra.

Manas Das is a graduate in Law, with a Science & Cost Accounting background from Cuttack, Odisha. He is a well-known poet and writer and writes both in Odiya and in the English language. Hailing from a cultured, humble family and pushed into entrepreneurship, he set up and managed a pharmaceutical manufacturing company for 44 years. He lives with his wife Lipipuspa in Odisha, and is blessed with a son and a daughter.