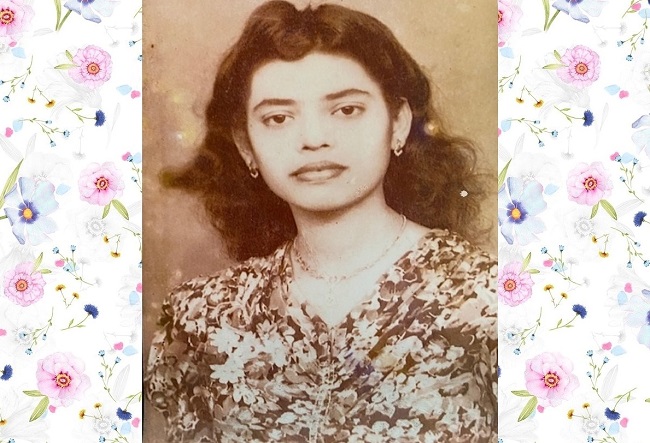 A 19-year-old college student, sitting on a chair on the verandah of his home, is studying for his exams. His home is situated a few hundred meters away from the road. A jeep full of policemen stops on the road. The youngster, engrossed in his studies, is blissfully unaware of the visitors, until four burly cops pounce on him, lift him from his chair and start carrying him away. He screams in protest, as they dump him on the floor on the back of the jeep like he is a sack of potatoes.

The driver turns the ignition key and the jeep starts. The next instant, he hurriedly turns off the engine and the jeep comes to a halt before it even travels a foot. The cops dismount from the jeep and look agape at a 40-plus woman standing on the road in front of the jeep.

Then the seniormost among them gathers his wits and yells at the woman, “What are you doing, here?” She is smirking. Standing with both her fists clenched and arms akimbo, she looks defiantly at the tough policeman.

“I am sub-inspector of Naupada, Thane, police station. You are obstructing our arrest, which is a criminal offence,” he barks, looking at the woman, menacingly.  “Sub-Inspector you don’t seem to have a name, but my name is Maisie Pereira and I am the mother of this boy, Oswald Pereira,” she says. “Why are you arresting my son?”

“Your son is leading the protest by your people of Kolbad village against an office being built in the maidan here,” the nameless Sub-Inspector began, pointing to a 1,000-metre open space across the road.

“You are wrong, Sub-Inspector. My son has been busy studying for his exams and is not part of the agitation.”

“Please let me do my duty,” the Sub-Inspector said. “Sakharam start the jeep,” he ordered.

“Over my dead body,” she replies, calmly, continuing to stand defiantly. “Over two dead bodies,” I shout. As the other cops had collected around the Sub-Inspector, I had quietly jumped out of the jeep to stand beside my brave Mother.

Suddenly there was a roar of voices. Dozens of villagers had appeared, surrounding the jeep and the cops. “We are a democracy and not a government run like Yahya Khan in Pakistan,” says one of the villagers. Seeing the crowd, the Sub-Inspector and his men beat a hasty retreat, quickly driving away.

The high-handed behaviour of the police in trying to arrest me when I was busy studying and not even a part of the agitation, made the villagers more determined in their fight against the acquisition of the plot, which served as a lovely playground all through our childhood. My brave Mother became a leading activist in the battle. The media, too, supported the villagers and the municipal body dropped their plan to build an office on the playground.

However, this was not the first time that Mother had fought oppressors. As a 15-year-old teenager, she once flung her sandal at a 6-foot plus Pathan, who called her “Khubsoorat ladki” (beautiful girl) and tried to offer a box of dates and a packet of cashew nuts to her.

But the most dramatic display of my Mother’s bravery was a day before my ninth birthday on September 27. It was an early Sunday. I, the ‘holy’ boy, used to faithfully accompany my Mother for the first mass in Church at 5.30 a.m. She went for the first mass because that left her free for the rest of the day to do the household chores and cook the family’s special Sunday fare.

As we were on our way to Church, a stocky man with a neck that might have been as thick as a man’s upper thigh, came in our way and said in Hindi: “Memsahib, mai is mohalla ka dada, Ismail hoon. Main bahut dino sey dek raha hoon, key aap savere, savere, har Sunday kahi jaate hon, apna bacha key saath.” (Memsahib, I’m Ismail the dada of this area. I’ve been observing for a long time that you go somewhere every Sunday morning with your child.)

Then he grabbed my Mother’s hand and said in broken English, “Baby, you wanting my protection, no.”

“No,” my Mother said and slapped him hard on the face. He left her hand and raised his hand to slap her back.

I had never seen a woman punch a man before, so I was stunned when I saw Mother punch him so hard on his nose that he was bleeding rivers of blood. He sat on the ground, holding his bleeding nose while my mother held my hand and coolly walked away.

Although tough with anyone who tried to oppress her or her children, my Mother was very soft-hearted and used to shed copious tears when faced with any sadness, including us going down in our ranks in class. Our family of seven children was used to Mother monitoring our studies and her interest in our academic performance was no easy task. If it was not our studies, then there were other small reasons that made her cry. We would fondly call her Tragedy Queen Meena Kumari and she would smile sportingly, blessed as she was with a great sense of humour.

Apart from her bravery, my Mother was a great friend and she seemed so much like one of us, always young at heart and so full of fun, that we sometimes took the liberty of calling her by her first name. She cooked herself for nine people ― seven children and parents ― and refused to hire a help to assist her, even though Dad could easily afford it, being the chief engineer of a large company.

As a young man, I was quite a recalcitrant guy, dubbed a “gone case” by family, relatives and friends. But it was Mother who never lost faith in me, and stood by me through all my downturns.  I wouldn’t be where I am, were it not for Mother.