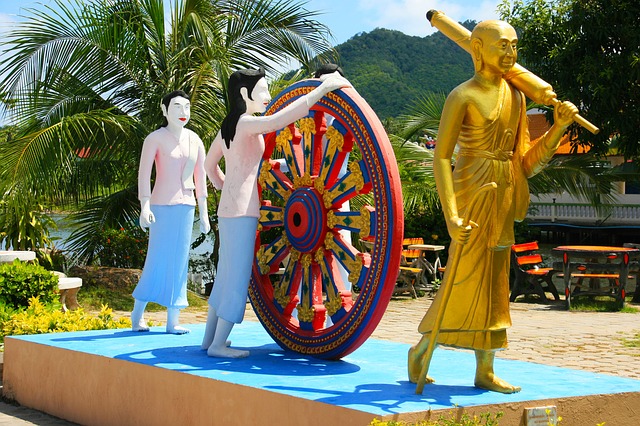 India is believed to be way ahead of the West and other regions of the world in spirituality. In fact, the world looks up to India for guidance and leadership in spiritual matters.

The great yogis like Swami Vivekananda and Paramhansa Yogananda were regarded as sages in the West and their teachings were looked upon as Gospel by their Western followers, who incidentally, owed allegiance to different religions. But, despite their different faiths, they have found great spiritual lessons in what Vivekananda and Yogananda taught them. It is believed that their missions abroad were by Divine sanction.

From them, the world learnt about yoga and karma, mainly through the teachings of the Bhagavad Gita, whose essence was demystified and explained in simple language to a Western audience not familiar with the universal truths.

The West also learnt about the fact that the great incarnations like Lord Rama and Bhagavan Krishna are so divine and powerful because their energies are blended and complemented with their better halves, Sita and Radha, respectively. Similarly, if Shiva is the soul, then Parvati is the Kundalini resting in the body.

While we all adore God as our eternal Father, many of us consider Divine Mother, equally, if not more important. For, it is Mother, who is the giver of unconditional love. She is Divine power. She is the embodiment of Nari Shakti or Woman Power that we all Indians worship.

In the West, where women are allegedly portrayed as objects of desire, this teaching of Nari Shakti has been of great help in transforming their view of women.

The philosophy of Karma and rebirth were alien to people in the West, whose main religion is Christianity. But our great Indian teachers taught them that these concepts were not only scientific but also very logical, metaphysically speaking.

Doesn’t all that I have written about, so far, sound so good and make us feel proud to be Indian and to have shown the world the path of truth and karma, and above all, woman power? The answer is an empathic yes, not once, but thrice ― Yes, Yes, Yes!

However, on August 15, as we celebrated India’s 75th Independence Day, all 11 convicts in the Bilkis Bano gang rape case were released by the Gujarat government as per a new remission policy. The convicts had been sentenced to life imprisonment for her gang rape and murder of seven members of Bilkis Bano’s family during the 2002 Gujarat riots.

By releasing the convicts not only has injustice been done to Bilkis Bano and her family, but the law of Karma has also been turned upside down. The convicts should have been left in prison to complete their sentence and work out their bad Karma of raping Bilkis Bano. This would have been in sync with the teachings of the Bhagavad Gita and its law of Karma, apart from the law of the country.

By releasing the convicts, the great philosophy of Nari Shakti that has made us proud Indians, has also been shown the door. The rape victim, Bilkis Bano, would have felt empowered that her rapists were convicted. Now that they are free, she has again become a victim.

May God guide us as a nation and let us pray to Bhagavan Krishna to show us the light and lead us back on the path of truth, justice and karma.