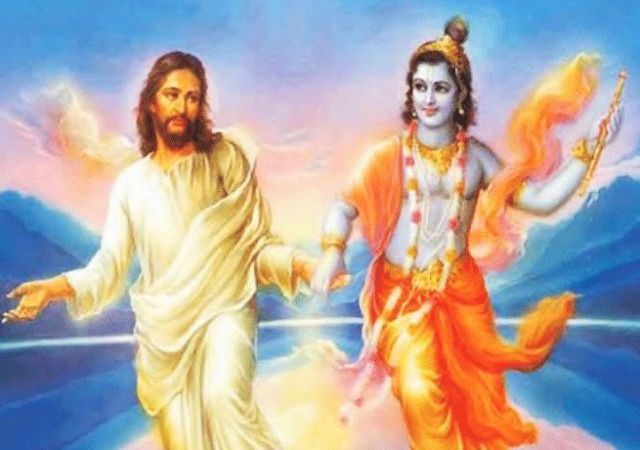 On Janmasthami today, let us make a pledge to develop the qualities of Krishna like love for all, childlike innocence, and playfulness; for, by loving all, like innocent children, we will be able to regard all religions and their Gods as equals, says OSWALD PEREIRA

I am a devotee of both Krishna and Christ. What does that make me? A blend of Hindu and Christian? Half-Hindu, half-Christian? My answer to the two questions, would be: ‘None of these.’ I am neither Hindu nor Christian.

Being part of a religion can be very comforting. It gives one a feeling of belonging. But when we seek religion for comfort or belonging, it doesn’t seem to be the right reasons to do so and the motive appears not really altruistic.

So, personally, I’d rather not belong to any particular religion and keep my heart and soul open to all the avatars, prophets and saints ― the more the better! Disciples of Paramhansa Yogananda, pray as follows:

Divine Mother, Heavenly Father,
Dearest Friend, Beloved God,
Lord Jesus Christ, Babaji-Krishna, Lahiri Mahsaya, Swami Sri Yukteswarji,
Beloved Guru, Paramhansa Yogananda
Saints and Sages of all religions, we humbly bow to you all.
May Thy Love shine forever on the sanctuary of our devotion,
And may we be able to awaken Thy Love in all hearts.
Aum, Peace, Amen.

I sincerely believe, confining Krishna or Christ to one particular religion colours them with exclusivity, marring the inclusiveness and universality of the two divine avatars, who descended onto earth to save the whole world, entire mankind and not one particular country, region or community.

Lord Krishna says in the Bhagavad Gita, “Whenever, O Arjuna, righteousness declines, and unrighteousness prevails, my body assumes human form and lives as a human being.” He adds, “In order to protect righteousness and also to punish the wicked, I incarnate myself on this earth from time to time.”

Clearly, Lord Krishna is not talking about incarnation in a country or region but on earth. He is also not descending on earth as a Hindu or incarnation of a religious denomination.

Then why do we equate Lord Krishna with India and Hinduism and even boast about our country showing the world the way with a religion that originated in our land, even running down other religions as unequal and not as good?

Lord Krishna taught us detachment and non-possession. But if it is one thing that we are so attached and possessive about, it is religion. Wouldn’t it be better to be humble and less egoistic about our religious beliefs and our Gods?

I have sometimes asked my Hindu friends who are critical of other religions, what if in their next birth they were not reborn into a Hindu family? The answers I have got were interesting. ‘We are proud to be born as Hindu because of our past good Karma and we will be born again as Hindu because we continue to do good karma.’

Christians don’t believe in rebirth. But they equal their Hindu counterparts in feeling proud about their religion. They seriously believe that Christ is the best God, and affirm that they are the ones chosen by Jesus to enter the Kingdom of Heaven ― so exclusive, isn’t it?

It’s perfectly human to love the God that you grew up believing in. But as one grows and matures, one should learn to grant beingness to other religions and their Gods.

Many in the West, including Christians, love and adore Krishna as much as they do Christ. Through Krishna, through yoga, and meditation, they have learnt to look within and rediscover Christ in His pure divinity, devoid of any pride and pomp.

There is a Krishna-Christ Connection, a synergy between Krishna Consciousness and Christ Consciousness.  As the father of the Krishna Consciousness Movement,  A C Bhaktivedanta Swami Prabhupada said: “When an Indian person calls on Krishna, he often says, Krsta. Krsta is a Sanskrit word meaning attraction. So when we address God as Christ, Krsta, or Krishna, we indicate the same all-attractive Supreme Personality of Godhead.”

On Janmasthami today, let us make a pledge to develop the qualities of Krishna -like love for all, childlike innocence, and playfulness. For, by loving all, like innocent children, we will be able to regard all religions and their Gods as equal to ours.