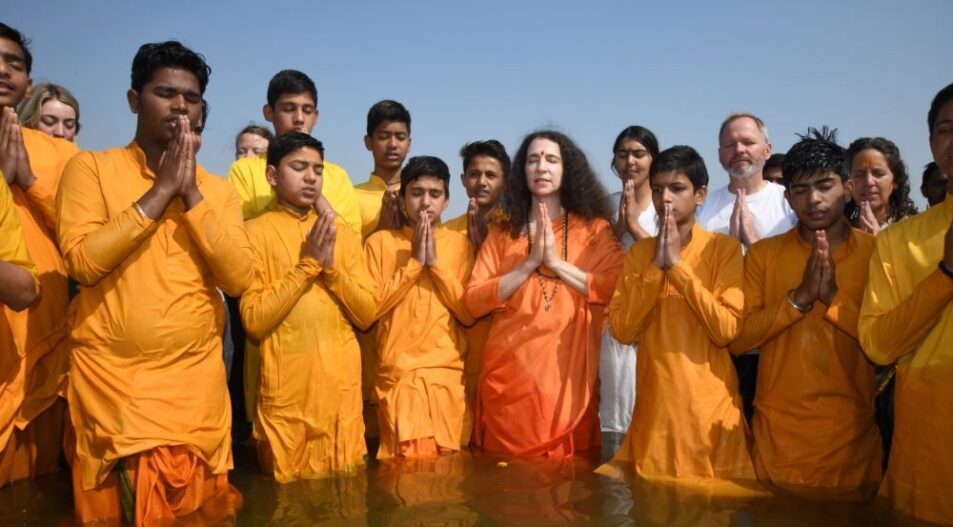 SADHVI BHAGAWATI SARASWATI explains how we can show the young the way to spirituality, especially if they don’t seem inclined

When I was in school, if our teacher asked a question, simply giving the right answer wasn’t enough. The teacher would persist, “And why do you say so? How do you know?” We not only had to give the right answer, we also had to defend our entire thought process.

I share this because that form of education is now more and more popular. Good education is less about simply memorising facts and figures and more about learning to think creatively. What children learn in school, they bring home.

If we tell them to do something, for example, to say their prayers or be a vegetarian, they will ask, “Why?” Because most of us didn’t ask our parents why, we don’t always have the answer. Or, the ones we have don’t pass muster with the new generation. “Because this is our culture.” “Because I said so.” “Because it’s the right thing to do.” These are no longer answers that they will accept.

The tragedy is that we do have answers to these questions. There really are very specific, clear reasons behind all these cultural and spiritual activities. It’s not that sitting in puja and performing yagna are somehow outdated. But because we never asked our parents about it, because that wasn’t the culture a generation or two ago, we may not know the actual rationale underlying these practices.

Frequently, children will make excuses and say they don’t have time to pray or meditate or read spiritual texts. It’s the same excuse adults use! There’s plenty of time to be on Facebook, to watch TV, to be on Snapchat, to post selfies; so it’s not a matter of not having time; it’s a matter of making choices.

When I’m in America, if my friend says, “Let’s go to the movies,” I’m going to say, “I don’t have time.” It’s true. In my mind-world, I don’t have three hours to go catch a movie. But if I say to her, “Come, let’s sit, let’s meditate, let’s go to satsang, let’s sing kirtan, let’s work out a proposal for the project for how we can build toilets along the banks of the Ganga”, she’ll say, “Oh, I’d love to but I don’t have time.”

The issue with our children is not just a matter of finding the quickest way to throw some spirituality into their lunch box as they rush out of the door, but how we can make it something that they’re prepared to spend time on. That’s the challenge for us. We know it’s valuable, but how can we put that in words that mean something in the world they live in?

While working with the younger generation, I have found that they may say they don’t believe in rituals, and that’s fine. Don’t worry, and don’t force them. It’s actually our doing; we haven’t been able to properly explain why we do them. But don’t blame yourselves either. Just say, “OK, God is not attached to your rituals, but that same Divine whom we worship in the ritual exists in everyone.”

This is something that our generation can and does grasp. They are the ones who often come home feeling enraged about discrimination! They want to work in the world, hurt by the lack of equality, the disparity they see; they are the ones wondering why they have to marry someone of their own caste. “We’re all the same, we’re all one, we’re all Divine, right?”

This is what the younger generation echoes. Therefore, to imbibe spirituality in them, simply say, “Look, no problem, you don’t have to worship God through puja. Worship God through everyone you meet. Wherever you go, whomever you meet, whether it’s the guy refuelling your car, a coworker, a friend, a subordinate, an employer, worship them all, treat them all as God.” What you’ll find, as I have, is they’re not only prepared to do that, but they can speak.

We need to let our children know that according to spirituality, Vasudhaiva Kutumbakam — the world is one family. This is why we must live in such a way that our brothers and sisters around the world don’t suffer and die. We can explain that this is why we don’t eat meat, because the meat industry is a great contributor to climate change, world hunger and water shortages.

Sadhvi  Bhagawati Saraswati, a Ph.D in Psychology, raised in an American family in Hollywood, California, was the Managing Editor for the monumental project of the 11-volume Encyclopedia of Hinduism. Her TEDx talk on her journey from “Hollywood to the HolyWoods” was watched by over 287,000 people and the documentary on her life was viewed online by nearly a quarter of a million people. Officially initiated into the order of Sanyas in the year 2000, she has been living at Parmarth Niketan in Rishikesh for 24 years, engaged in spiritual practice and service.