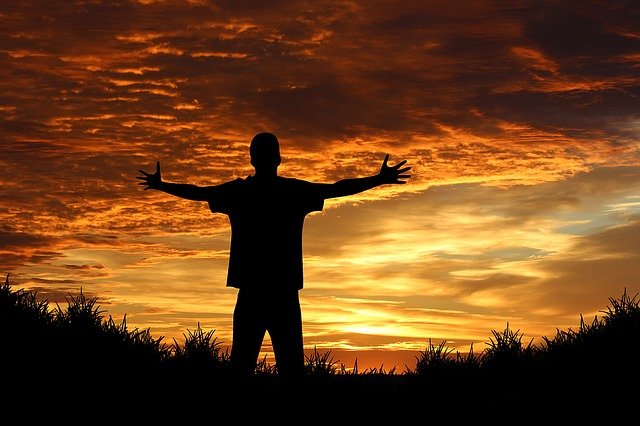 Inhabitants of this beautiful blue planet earth are blessed immensely with varieties of gifts, which help us to sustain our lives here. We get air and water from nature, fruits and eatables from plants, love and care from parents, help and support from people around us, knowledge from teachers, so on and so forth.

These abundant blessings inspire us to offer gifts and love in return. One of the best ways to acknowledge these gifts is to express gratitude. But to explore the virtue of gratitude, we need another quality ― contentment.

There is a story which our uncle once told us. The story was narrated to my uncle by his grandfather. It’s an interesting story with a great message:

Many years ago, a lonely poor man called Raheman lived in a small hut by the side of a dense forest. He was orphaned at an early age. Despite his poverty and loneliness, Raheman was a man of faith and a strong believer in God. He had learnt  to sing devotional Sufi songs from his mother. Singing was his livelihood.

He would visit few houses in the village some distance away during the morning hours and return in the afternoon to his hut in the forest. While preparing his food, he would devoutly sing songs in God’s name. This was his daily routine and he, thus remained content in his life.

When Raheman became old, he changed his begging routine from daily to twice weekly, and managed to sustain himself through the week. Lying in the hut on his resting days, Raheman continued to sing devotional songs, expressing his gratitude to Allah, for His compassion and gifts. Tears would flow from his eyes as he was lost in his prayers.

After some more years, one day Raheman thought: “What a life am I leading? I have spent it thinking only about my meals. Have I done anything other than begging and preparing my food?”

He cried in agony: “Oh dear God! How many more days have I to spend life like this? Why am I not meeting the end of this life?” The sadness and angst in his voice was disturbing Raheman’s serenity. Then he thought: “If I fast, soon my physical existence may end.” He thought he had lived a contented life with the grace of the Almighty. If he went back to Him, he would get a chance to serve Him.

With this plan of returning to God, one day Raheman went to the village for his last day of begging. Coming back, he prepared a good meal for himself. But before partaking of it, he had a good, long bath and then offered prayers to God. Content, he took his meal and rested.

The stock of food materials took three days to finish. On the fourth day, while bathing, he got engrossed in his prayers, though he had not consumed any food. At night when he felt the pangs of hunger, he waited for his end.

But his end did not come. With an increasing appetite and weakness, Raheman sat silently, looking at the blue sky and cried: “Oh God, why the end of this life is taking so long?”

The next day was more tragic. Being without food, Raheman was very weak and the silence of the forest, so far consoling and soothing, now hurt him for the first time in his life. His eyes filled with tears, and he prayed to God to take pity on his condition and lift his soul from his body.

During the dark, mute night, in pain and sorrow, Raheman cried loudly and prayed to God to end his life. God heard his prayers and sent an angel to assist him. Raheman greeted the angel and thanked God for His compassion.

Raheman said: “Oh Angel! I am fed up with my daily begging for food. I have lived a full life without much use but with contentment. Now I want to go back to God. But why is it taking so long? The pain of hunger forced me to cry and pray to God to take me quickly.”

The angel replied: “Life has always a mandate. Once that time comes, you shall leave this body. When you beg, really no one gives you anything. Everything belongs to God. You are getting your own stock from God. Till your stock is exhausted, you will receive them.”

The angel was amused. He knew that this would not be possible. But as Raheman was adamant, he went back promising that he would convey his request to God.

God was listening to everything. He smiled and raised His hand. In his hut, the magnanimous compassion of God seemed to shine and Raheman was spellbound. He sang praises to God. Streams of tears flowed down his eyes and he went into deep slumber, while singing.

He couldn’t tell how long he slept. But once he opened his eyes, he felt the warmth of the sunrays peeping through the roof of his hut. He knew day had descended. He came out and to his utter surprise, found bags of groceries and vegetables arranged around his hut. He stood silently for a long time. He told himself: God is great. The angel was right. He had stock. God had granted his prayer and sent his balance stocks, all at one time.

Raheman took his bath and prepared his meal. He was very hungry as he had not taken food for four days. He ate a heavy meal, sang devotional songs and felt his heart and soul merging in them. Night came and he fell asleep.

The next morning, he cleaned himself and his hut. He sat reflecting and chanting Allah’s name. He prepared his meal and again chanted. Evening approached, followed by night and he fell asleep.

On the following day, as he counted his stocks, he thought he could live on them for another 30-40 days and then only he could leave this earth. An idea came to his mind. He had mostly lived his life for himself. There were many beggars who lived at the outskirts of the village. He thought, why not invite them  to enjoy his stocks.

He left for the village and when he saw his friends, he narrated the whole story and invited them to his hut. The other beggars had always thought Raheman was a mad fellow and was imagining or cooking up a story. Yet, they accompanied him to the forest out of sheer curiosity.

Reaching his hut, they were surprised to see the stock of food. They thanked Raheman and prepared food for the entire clan. They rested near the hut and remained there for a few days till the stocks were exhausted.

The day the beggars left, Raheman had nothing much to eat. But Raheman was blissful and was engrossed in chanting, knowing that his stocks were exhausted and he had no more food to eat. He now felt he would find his way to God. He spent the day without food and when evening approached, he sat for his prayer session. He went to sleep while praying.

Next morning, Raheman got up and took his bath. When he went to the front of his hut after bathing, he found well-cooked food on a banana leaf placed in front. He looked around but found no one. Raheman thought since his stocks were exhausted, he should not be tempted with the food kept outside, which may be meant for another person.

He remained inside his hut and chanted Allah’s name. In the afternoon, he peeped outside and found the food still there, still looking fresh. The smell of the food lured his mind, but he restrained himself and went inside the hut and chanted God’s name.

Night came and again Raheman went out to face the temptation. The food seemed still fresh.  Raheman was confused and felt tremendous hunger. He knew that he would commit a sin if he took some other person’s stock. But he remained calm.

The night advanced and the agitation in his mind accelerated. Being crushed by hunger and right action, Raheman again cried and prayed: “Oh! Allah! Why are you putting me in this crisis? Do not you know that I am a poor ignorant soul? Please take pity on me and allow me to leave this body and take refuge at your lotus feet.”

Raheman cried loudly like a child. God smiled in his abode and again deputed the angel with a message. The angel appeared and asked Raheman the reason for his agitation and sadness.

Raheman said: “Oh! Angel, you told me God has granted my entire stock. I received it and exhausted it. Now I await my soul to be picked up. But again, I was pushed into another dilemma. There is food outside my hut. I am hungry since the last three days and now I am unable to resist my temptation. But I know that this is someone else’s stock. I do not want to commit any more sin by stealing another’s food. Please relieve me from this bewilderment.”

The angel smiled and conveyed to Raheman, God’s message. “Raheman! The food outside belongs to you. It is your stock. You have exhausted your old stock in such a magnanimous way, sharing it with others, that this huge, new stock has been created. You need not go begging any more. Your stock shall be provided at your door. Be happy and sing His glory.” The angel then disappeared.

Raheman stood there motionless in a trance. Gratitude flowed from his entire being, as tears flowed like rivulets from his eyes. They were not tears of sorrow. They were tears of joy and gratitude. Ananda or bliss engulfed him. Though old, he lived for many years after that. His stock and food didn’t matter anymore. Ananda became his real food and companion.